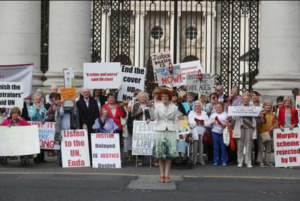 Marie O’Connor, chair of the Survivors of Symphysiotomy, with members of her group and supporters outside the Department of the Taoiseach in September 2014

Paul Cullen, in the Irish Times, is reporting that 53 women, who sought €150,000 compensation under the State redress scheme for women who had a symphysiotomy, have been told they won’t receive the money as it “was established they did not undergo the procedure”.

Mr Cullen also reports that retired judge Maureen Harding Clark, who has been assessing the claims, has warned that she might set a deadline for the furnishing of records “as ‘the scheme does not have an unlimited life’”.

“[Ms Clark] said she understood some women have been unable to establish their belief they had a symphysiotomy because their records are not readily available.”
…
“Survivors of Symphysiotomy, a group representing women who had the procedure, said the scheme sets an “impossible” level of proof.”
…
“One woman was asked for receipts for incontinence pads she bought in the 1950s, [Marie] O’Connor claimed.”