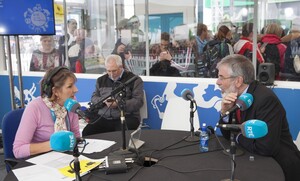 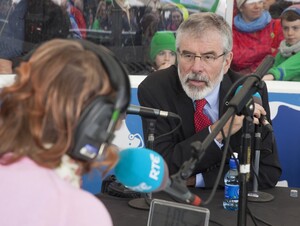 President of Sinn Féin Gerry Adams appears on the News at One (with Aine Lawlor) on the RTÉ set at the National Ploughing Championships 2016 to address allegations made on BBC NI’s Spotlight last night that he directly ordered the murder of party official and British agent Denis Donaldson.

Áine Lawlor: “Gerry Adams is with me at the RTÉ Ploughing Studio, and Gerry Adams, thank you for joining us. You’re saying you specifically and definitely refute these allegations. Did you see the Spotlight programme?”

Gerry Adams: “No, I didn’t see the programme, but I got a readout of it this morning, and I read the press coverage of it, and I very specifically and categorically and in an unqualified way deny these allegations,
Let’s go back (inaudible) just for a moment, these allegations, and Denis Donaldson’s claims that he was an agent came after what was called Stormontgate, where there was an allegation, totally wrong, that there was a Sinn Féin spy ring at Stormont.
And that was engineered by the same people who, in my opinion, engineered Denis Donaldson’s death, but who at that time brought down the Stormont Assembly. The political process collapsed as you may recall. Now, that the BBC would broadcast unsubstantiated allegations from an anonymous person, self-confessed agent, about me, is low journalism indeed.”

Lawlor: “The unidentified figure in the Spotlight programme, you couldn’t see him, he was filmed in silhouette, he was given the name Martin. He claimed even though you had stepped down from the Army Council in 2006, you were consulted on all matters.”

Adams: “Well, I’ve denied all of that, y’know, and reading the newspapers this morning, he provides no evidence to this, he said I would have been consulted, or words to that effect but look…”

Lawlor: “The exact quote was “I know from my experience in the IRA, that murders have to be approved by the leadership.” “Who ordered the killing?” he’s asked. “Gerry Adams”, he says, “he gives the final say”. He says South Armagh demanded action from the Army Council, and you had to agree.”

Adams: “Well, I’ve already denied that, and I was shocked and surprised when I heard about his murder. The Garda investigation is ongoing. They clearly are forming (inaudible) that it was dissident Republicans.”

Lawlor: “It was claimed by the Real IRA three years ago…”

Adams: “…and the IRA was in ceasefire at that time. I think the ceasefire was around 2004, around that time, I’d actually left the field entirely around that time. There’s also an ongoing demand from Denis Donaldson’s family for an inquest which they have been denied ten years later. One of the RUC’s Special Branch operators said they will not co-operate with some of these investigations.
Now, Áine, we have to ask, where do all these spies and informers and agents come from? It comes from the fact that the British, during the war, used all of these counter-insurgency devices and many, many more, to try and intimidate people in the North…”

Lawlor: “There were lots of actions taken by lots of sides…”

Lawlor “…make it as briefly… I don’t want a history lesson.”

Adams: “Well, it is history, and we have succeeded in coming out of that history, but some of us unfortunately, don’t like the outcome of that history, they don’t like the fact that Martin McGuinness and my Sinn Féin ministers are in the Executive in the North, Sinn Féin is growing in the South, which wasn’t the outcome they were working towards, and that’s where all of this comes from.”

Lawlor: “Which also brings us to the unresolved part of the Peace Process, the part that could be in fact the hardest part, of the many difficult bits, that is what are called legacy issues, there’s a new initiative coming up on that later in the Autumn. Denis Bradley said last night on the programme, he’s seen secret records that state that at any one time, the security forces were running about eight hundred informers, throughout the Troubles. That’s a lot of people for a small community, and a lot of the most controversial deaths were the deaths of informers. Are we ever going to know the truth, unless the IRA tells us its side of the story?”

Adams: “Well, I signed a deal, and Martin McGuinness signed a new deal to deal with legacy issues during the last number of rounds of talks. But let me remind you, (inaudible), and remind you we were told all those that were killed at the time were all gunmen and women, they weren’t.

They walked out of a meeting with British secretary of state, they are refusing to fund and provide issues for these legacy issues. All the legacy issues left outstanding can be resolved but the British government are actively involved in covering it up. We’ll come back to this issue and I’ve raised Denis Donaldson’s death and the circumstances of his killing, on more than one occasion, and the Irish government has a real responsibility to get the British government to face up to its obligations under successive agreements, and the Republicans will not be found wanting in dealing with these issues.

Lawlor: “And there’s also issues of course in Loyalist representation, in many legacy talks, why would British intelligence be moving against you at this stage, one of the key architects of the peace process, when you’re in the twilight of your political career?”

Adams: “They’ve never stopped moving against me, you (inaudible) in the last 10-15 years, and these allegations are usually aped and repeated by a compliant media…”

Lawlor: But the war is over, surely, Gerry, why would they be going after you?

Adams: “Not for them, I’ve already said to ya, not for them! This is about stopping the onward development of Sinn Féin, the uncertainty, when we want to tackle sectarianism and we want to tackle division, they don’t. Now, may I remind you, Áine, and these are very important issues we’ve just discussed. We are at the Ploughing Championship. I’m here, Sinn Féin has a very large presence here, we’re organised across this island, we believe Rural Ireland has been let down by successive governments…”

Lawlor: “One final question on Spotlight: will you sue them? They accuse you of ordering a murder that you absolutely and specifically repute, you’re clearly angry about it: why don’t you sue them?”

Adams: “My legal advisors give me the kind of guidance that I require, I will sue them. I’ve taken various cases against a number of articles, corrections and apologies from a number of media outlets…”

Lawlor: “Because earlier you seemed to be saying because they carried a denial it wouldn’t… would you?”

Adams: “I don’t have big pockets like RTÉ or the BBC, if my legal advisors tell me to take a case, I will take a case. I have a case pending against other media outlets at this time.”