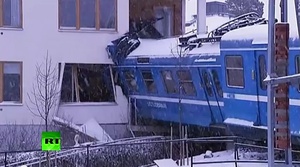 A cleaner stole an empty commuter train from a train depot and drove it to a suburb of Stockholm where it derailed and slammed into an apartment building. The woman was seriously injured in the crash in the early hours of Tuesday and was flown to a Stockholm hospital. No one else was injured. A spokesman for train operator Arriva said the woman, born in 1990, stole the four-car train at a depot outside Stockholm. She then drove it about a mile (1.6 km) to the end station on the railway line, where it jumped off the tracks, careened for about 30 yards (25m) and crashed into a three-story building. Photographs from the scene showed the crumpled front car of the train buried deep into the structure. The woman’s motive was not immediately clear.