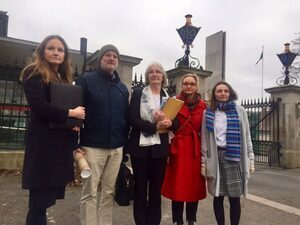 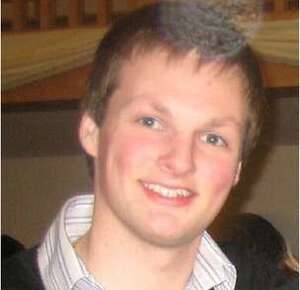 Lucia and Jim O’Farrell with their daughters outside Garda HQ in Phoenix Park in January of this year; the late Shane O’Farrell

The family of the late Shane O’Farrell will hold a demonstration outside Leinster House before meeting with TDs, including Fianna Fáil’s justice spokesman Jim O’Callaghan.

They plan to discuss the Department of Justice’s rejection of terms of reference drawn up by District Court Judge Gerard Haughton who was appointed by the Minister for Justice Charlie Flanagan to chair a scoping exercise into the death of 23-year-old Shane.

Shane was killed on August 2, 2011, while cycling home when he was struck by a car driven by Zigimantas Gridzuiska.

The same motion was carried in the Seanad in February 2019, with Senator David Norris telling the Seanad:

“Since that vote [in the Dáil] eight months ago the family has discovered that two statements given by Zigimantas Gridziuska were altered by the Garda for the inquest into Shane’s horrific death. This is most extraordinary. Left out was reference to his heroin problem.

“Those statements were not redacted: they were completely removed and the sentences joined up. These incomplete statements would only have been noticed if compared with the original statements. It is very much in the public interest that there would be a public inquiry in line with what the other House has already decided…”

In the same month, February 2019, Minister Flanagan chose to launch a scoping inquiry instead of a commission of investigation – despite the votes in the Dáil and Seanad – and appointed Judge Haughton to carry this out.

However, the O’Farrell family believe that the department’s rejection of the judge’s proposed terms of reference “undermines the scoping inquiry” and that the new terms put forth by the department “are deliberately narrow”.

Judge Haughton submitted his terms of reference – considered after he met the family and which the family respected – to the Department of Justice on April 24, 2019.

However, according to the family, the department has:

Removed references to Shane and the family’s rights under the ECHR to ensure an effective investigation into the unlawful killing. To date the State has failed in its obligations under the ECHR;

Removed consideration of the prosecution of Shane’s case,

Removed any consideration of the Coroner’s Inquest into Shane’s death, in which serious irregularities have emerged;

Removed any investigation into the previous prosecutions of the accused (despite him being in breach of multiple counts of bail when he killed Shane);

Limited the judge to take into account the outcome of reports prepared (being reports which in the families view are deficient), rather than a review of the investigations behind these reports, as originally envisaged in the February terms of reference.

This morning, the family have said:

“The family has the utmost respect for Judge Haughton, however the family believe that the terms of reference now proposed by the department do not reflect the spirit of the Dáil and Seanad resolution.

“These terms will not allow the inquiry to ascertain the full and relevant facts pertaining to Shane’s case and appear to be an attempt to curtail the scope of the Inquiry and further delay matters.

“The terms proposed by the department would lead to a narrow and unfair consideration of the complex legal and public policy issues that are at play in Shane’s case and they are not sufficiently broad or exhaustive to address the State’s ECHR obligations.

“The family attend Dáil Éireann today in a bid to secure truth and justice on Shane’s behalf.

“This requires a public inquiry to establish the truth of what happened and we will be making representations to TDs today seeking that the resolution of the Dáil and Seanad for a public inquiry is followed.”

Related: The road to truth in Shane O’Farrell case getting narrower and narrower (Michael Clifford, The Irish Examiner)