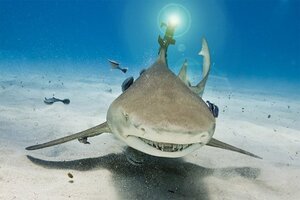 Wicked Lasers, with the help of celebrity marine biologist Luke Tipple, attached a 50mw green laser to the dorsal fin of a Lemon Shark last month in the Bahamas.

Tipple rationalised the awesome but shameless promotional to Wired thus:

“This was definitely a world first,” Tipple told Wired. “Initially, I told them no. I thought it was a frivolous stunt. But then I considered that it would give us an opportunity to test our clips and attachments, and whatever is attached to that clip, I really don’t care. It was a low-powered laser that couldn’t be dangerous to anyone, and there’s actually useful application of having a laser attached to the animal.”

Tipple said the experiment was instructive in a number of ways. For starters, he was able to further test his clamping apparatus, which is typically used for traditional data-aquisition equipment.
He also wanted to verify anecdotal evidence that sharks avoid laser energy of specific spectrums and wavelengths. Curiously, at least with the Wicked Lasers model, he found the opposite to be true: “Although further testing is necessary, time and time again, sharks were actually attracted to the laser beam,” he said.

Finally, he said the experiment was helpful in measuring a shark’s velocity and trajectory in real time. “We were able to see how their body positioning relates to a target,” he said. “You can get a very clear description, via the laser, of what the shark’s body is doing.”