Amongst our patients at #Idomeni today were 3 kids under 10 with plastic bullet wounds to the head. pic.twitter.com/RDP0VN3CWC 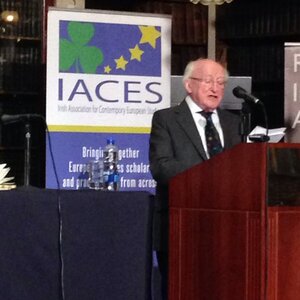 From top: A video of Dr Conor Kenny, based in Idomeni, explaining how he treated three children under the age of 10 for plastic bullet wounds to the head on April 10; and President Michael D. Higgins speaking at the Royal Irish Academy earlier today

During this speech, he spoke about Europe’s collective response to the 1.5million people who’ve travelled to Europe in the pursuit of refugee protection.

Why did the member states of one of the globe’s richest and most powerful entities, a Union of 508 million citizens, feel so threatened by the arrival of a 1.5 million refugees and migrants last year?

This, I contend, is revelatory of a certain perception of ourselves as Europeans, one that is predicated on fear. It reflects a sense of helplessness, which of course is far from irreversible, should our elected representatives, our public intellectuals, our media, show constructive leadership and craft a discourse of confident hope for Europe.

Instead, in their coverage of the “refugee crisis”, European media have tended to conflate the image of Europe with that of the small Greek island of Lesbos; they have presented to us a vision of Europe as a frail isolated rock overwhelmed by a tsunami of uprooted people.

When one considers the prosperity and the rich diversity of so much of Europe, where so many people from all regions of the globe have settled peacefully and successfully over so many decades, confidence, not apprehension, should guide our response to the arrival of new migrants.

Yet, whereas one might have expected, in the face of the new challenge, a reviving of the old European adage – “strength through unity” – what we have witnessed instead is a ruinously and narrowly self-interested response on the part of many member states.

There were, and it is important to acknowledge them, several remarkable exceptions to such approach; but the rejection of the European Commission’s proposal for a binding quota system has left the “frontline states” of Greece, Italy and Malta to rely largely on their own, limited, resources in responding to the urgent needs of so many migrants and refugees.

This calamitous situation does not just jeopardise the future of Schengen and the principle of free circulation within the EU; it is also indicative of a severe breakdown of trust amongst the EU member states. Most alarmingly, it has the potential to undermine the values and principles at the basis of that humanistic spirit to which Europeans recommitted themselves after the devastation of World War II.

Can we leave millions of mothers and fathers, teenagers, children and babies, to wait in uncertainty, hopeless poverty and squalor at the border of Europe? Can we avert our gaze from the even larger numbers of those who are trapped in precarious camps in Turkey, Lebanon, and Jordan? Is our response to be defined by barbed wire, tear gas and rubber bullets?

We might, at this crucial juncture, recall the words of Hannah Arendt in her essay, “We Refugees”, written in the midst of World War II, when Jewish refugees from Poland, Germany, Austria, Romania, and elsewhere had found themselves trapped, in an utter state of vulnerability, in the middle of Europe:

“Refugees driven from country to country represent the vanguard of their peoples … The comity of European peoples went to pieces when, and because, it allowed its weakest members to be excluded and persecuted.”

Unfortunately, the element of fear, exacerbated by the threat of terrorism, has only increased our European leaders’ urge to find ways, to curb the influx of refugees at all costs, so as to reassure public opinions who tend to view through the same anxious lens “security crisis” and “refugee crisis”.

Many commentators have rightly noted that such hasty responses, sometimes achieved in disregard of usual European rules and procedures present serious risks for the rule of law and the principle of human dignity as cornerstones of the European project.

The agreement struck last month by Turkish Prime Minister, Ahmet Davutoglu, and EU leaders is an important effort at countering the exploitation of migrants by ruthless smugglers.

However, we must ask ourselves, does this agreement provide a lasting solution to the crisis? Will refugees not seek alternative routes for coming to Europe? And, most importantly, can such an agreement fully and effectively respect the human rights obligations which provide the foundation for the European legal order?

These are essential questions which remain to be adequately answered. I strongly believe that we should be wary of bending European and international human rights legislation to breaking point. The contravention of core principles might be politically convenient in the short term, but such breaches would only jeopardise the survival of our European Union in the long term.

Moreover, if we fail to uphold the values of human dignity and respect in our response to the plight of refugees, how could we expect to be taken seriously when we ask, quite rightly, that the newcomers also respect such fundamental European values as freedom of speech, freedom of expression and gender equality? How can we speak with authority, given such departures from what we previously acknowledged and proclaimed were universal principles?

These are the questions that were posed to us this week also by Pope Francis and Patriarch Bartholomew during their visit to Lesbos – the moral questions which are inescapable for all Europeans at this time.

They are questions, too, which are given a further poignant urgency by the reports emerging today of further tragic losses of life in the Mediterranean.

To give protection, food and shelter to those who are fleeing war, oppression or starvation is a matter of fundamental, universal human solidarity. It is also a matter of legal responsibility.

EU member states, through their being party to the Geneva Convention of 28 July 1951 on the Status of Refugees, have a duty to do their fair share to resettle people in need of international protection. There can be no cap on this fundamental responsibility, no limit set on the number of those eligible to request asylum.

The right of asylum – the notion that a person persecuted in their own country may be protected by another sovereign authority – is, as you all know, an ancient juridical concept, and one that is a corner stone of the European legal order.

Some of our most prominent European thinkers have been refugees: René Descartes, for example, who was persecuted in France by Voetius and his followers, sought refuge in the United Provinces [the Netherlands], while in the same years, French King Louis the XIII refused to extradite Dutch citizen Hugo Grotius, one of the founders of international law – the same man who wrote of asylum that it existed for those “who suffer from undeserved enmity”.

Rather than responding with regression to short-term interests, we Europeans can with so much benefit draw on our rich intellectual and philosophical tradition as we seek, in our time, to find a just compass by which to define our relation to the other, the stranger of today, the fellow-citizen of tomorrow.

In 20 years from now there will be Syrian men and women who will remember what happened to them in Europe as children, how they were kept waiting in the icy Balkan winter before being sent back to the other shore of the Mediterranean, or, on the contrary, how they were offered hospitality in a new country, and how they were able to rebuild their lives free of fear and embrace the opportunities to contribute to a new Europe of prosperity and tolerance.

As I wrote these words, I thought too, of my speeches in recent years in Boston, Chicago, New York where I spoke of the post-Famine Irish migrants arriving in the ports of Canada and the United States.

For us to have a positive, practical and human response to the current situation, for Europe to accommodate the dreams and hopes of so many families currently on the road, it is imperative, I believe, that we also focus on building up social cohesion within our states.

All of us Europeans should make it our priority to build thriving, inclusive societies, not just for our citizens, but also for all those residents of the European Union who were born elsewhere.

This involves, of course, adjusting our labour markets and crafting bold and ambitious policies in such fields as education and schooling, language training, housing, as well as political participation.

Read the speech in full here

Previously: For Your Consideration: Borderland

When People Are No Longer Considered People