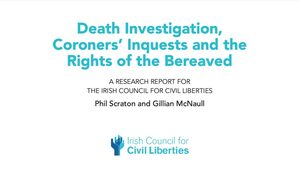 A report by Professor Phil Scraton and Dr Gillian McNaull, both of of Queens University Belfast, has been published detailing how and why Ireland’s coronial system is inadequate and fails human rights standards.

The report, entitled Death Investigation, Coroners’ Inquests and the Rights of the Bereaved, includes 52 recommendations addressed to Government, politicians, Coroners, An Garda Síochána, and the media.

Chapter 4 of 88-page report includes the experiences of families who took part in the research.

“The death of another family’s baby occurred in hospital and they felt their loss was minimized by the institution. The baby’s body was transported in the boot of a taxi to a different hospital for a postmortem. His distraught mother was ‘brought out the back door, hidden from the other mothers so she wouldn’t upset them’.

She was informed that her baby was stillborn, yet the pathologist found that he had died through oxygen deficiency and ‘was alive for twenty-three minutes after he left the womb’.

Their consultant reported the death to the coroner.

The family had believed their baby was stillborn until they received the case file confirming he had been born alive. At the inquest the HSE challenged this version and the family’s lawyer questioned the evidence: ‘Medical notes had been changed, hand-written changed. [They] silenced the alarms on the foetal alarm. Not discussed with the coroner’.

The family raised concerns regarding systemic failures, claiming that the hospital, ‘is not putting baby deaths on the registry, information is being hidden … the coroner is not getting the information’.

They considered that the inquest did not achieve preventive outcomes. Although it returned a verdict of medical misadventure and altering the records was criticised, there was ‘no accountability in the health service’ and the consultant had ‘no case against her to answer’.”

“A family whose son had died in suspicious circumstances stated, ‘for the last 16 years we’ve been trying to find the truth about what happened to him and we’ve been stonewalled by the Gardaí’. He went missing following an assault by a well-known member of their rural community. They stated that the police refused to mount a search:

Samples taken during the autopsy were given to the police for testing but were delayed for sixty-seven days before submission to the State Laboratory, during which time some samples had deteriorated: ‘There didn’t seem to be anyone upset with what was in front
of them’. Further meetings created an expectation that the bereaved family would receive further significant information: ‘I was always believing, ‘This is going to tell us something today’, but we never got to that point’.

The family believes a full investigation was never conducted, their search for answers frustrated. Garda meetings were not recorded and no minutes were taken. A witness to the assault was interviewed but the evidence was withheld from the inquest:

‘I never got that statement for 14 years … the coroner had it the day of the inquest and didn’t release it to us. For 14 years, while they were telling us it never happened, they had this statement, which we have, that it did happen, and they had it from day one.’

The family considered that the circumstances in which their son died were obscured by personal relationships within the community involving the alleged perpetrators.”

The report has been two years in the making and was commissioned by the Irish Council fo Civil Liberties, with support from Irish Human Rights and Equality Commission.”