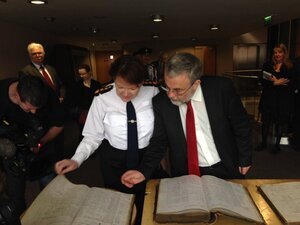 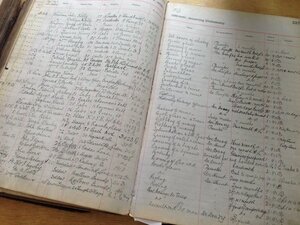 From top: Garda Commissioner Noirín O’Sullivan and SIPTU’s Jack O’Connor perusing the Dublin Metropolitan Police prisoners’ books this morning; and one of the books

The Dublin Metropolitan Police (DMP) Prisoners Books for 1905-1908 and 1911-1918 are amongst the most valuable new documents to come to light on the revolutionary decade.

They include important information on social and political life in the capital during the last years of the Union, from the period of widespread anticipation of Home Rule, to the advent of the 1913 Lockout, the outbreak of the First World War in 1914, the Easter Rising and its aftermath in 1916, and including the conscription crisis of 1918.

They will also be invaluable to those interested in criminology, genealogy, and family history.

Each volume contains the name, age, address, occupation, alleged offence and, in most cases, outcome of cases involving over 30,000 people arrested by the DMP.

Each volume also contains an index of prisoners with references to the pages containing details of the charge. The information in these volumes serves, therefore, to provide new perspectives on life in Dublin during a time of war and revolution.

The collection can be viewed online here