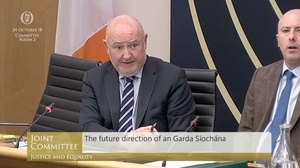 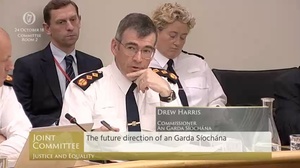 Chair of the committee Caoimhghín Ó Caoláin raised the Justice for the Forgotten group who have been seeking answers about the Dublin and Monaghan bombings from 1974 since the group formed in 1996.

Mr Ó Caoláin asked Mr Harris if he would meet with the group and Mr Harris said he would.

They had this exchange…

Caoimhghín Ó Caoláin: “You have yourself indicated earlier a willingness to meet with victims and representatives of victims. In this particular incidence, the organisation Justice for the Forgotten very heroically led, I may say, by a lady known as Margaret Irwin. Can I ask will you facilitate an opportunity to meet with Ms Irwin and with victims of the Dublin and Monaghan bombings? Survivors and bereaved families? There were 33 deaths involved.

“And, you know, in your own position, and unquestionably you’re highly qualified for the position, you’ve undertaken, your experience, being a significant factor in it. But can you because of your previous roles and responsibilities and exposure. Can you bring something more to the call, the wish and, you know, despite the passage of time, in 1974, here we are, what 44 years later.

“You know, that cry for truth and for justice in relation to those particular atrocities hasn’t faded.

“Can you, in your experience, knowledge of contact and communication et al, can you offer any hope for a better position than maintains currently where, even as Deputy Commissioner John Twomey has indicated, this is not an area that there has been a communications flow, something that we all too sadly know very well.”

Drew Harris: “These atrocities are now my responsibility to investigate. So I think the preface and comments in that regard, I’m very much aware of my responsibilities around these. And if I might take time then, to consider your questions and then come back to you on where we are at this point in time.

“Your earlier question about meeting with the group, Justice for the Forgotten, yes, of course, yes, I will meet with them.

“The only, when you say about, hope for individuals, I think I have to temper that remark. My experience of trying to investigate these matters, legacy matters as they are now called, has been one of frustration that very little is achieved through the criminal justice route.

“And so I will meet with them, I will consider the points that you’ve made and will respond to those but these cases have proved, down through the years, to be incredibly difficult actually to in effect bring to a successful criminal justice conclusion.”

“One may able to find other information which is new, it’s very rare that that leads to criminal justice actual ending to this.”

Ó Caoláin: “Well in this particular instance, and I close with this, in this particular instance, it’s that information held long past has not been forthcoming and this has been repeated time after time by those entrusted with the exercise of investigation and inquiry. And in reflection of that failure to cooperate, on the part of the British Government and all its agencies, including the RUC, in its time, in terms of proffering, presenting what information it could share in relation to those particular events of that day back in May 1974. There is that significant issue.

“So I appreciate your reply.”