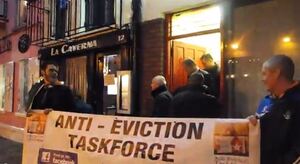 Footage of a demonstration outside the Dublin City Sheriff’s office on Fownes Street on Tuesday evening where a group who arranged a meeting with the City Sheriff claim he reneged on their appointment.

The group which included Dublin Says NO, Anti Eviction Taskforce, Independent Resistance Ireland, Anti Eviction Ireland and Occupy Dame Street then ‘chased’ the Sheriff and his colleagues as they made their way towards Pearse Street while he was accompanied by members of the Gardai.

The footage also shows the Sheriff and his colleagues  being ‘ejected’ from a taxi as the driver refused to accept their custom. 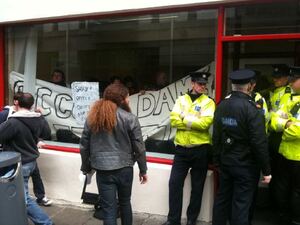 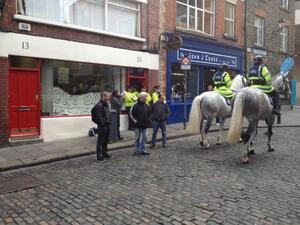 Protest (apparently related to the eviction yesterday of Brendan and Asta Kelly from their home in Killiney, Co Dublin) by Occupy Dame Street in Fownes Street, Temple Bar, within the last hour.

Video via Mark Malone .Pics via TV3 and Alan Butler