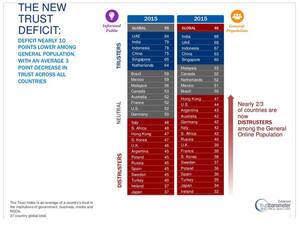 if you can believe a global PR giant.

“Some pointers: Irish people are now the least trusting people of all countries measured (no Greece on this). The measure is that of trust in “government, business, the media and NGOs”.Goverment remains the least trusted at 26%, despite a +5% points increase on last year. NGOs are the most trusted despite falling 10 percentage points to 48%. Business is at 38% (down 3% points) and the media is down 3% points year on year (but is down 11% points since 2013).” 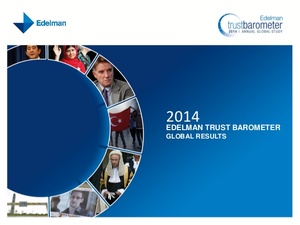 Trust in government in Ireland has fallen by 11 points over the last 12 months according to the 2014 Edelman Trust Barometer, which also reveals that trust levels in NGOs, business and media is down over the last yar.

The Trust Index, the average trust across the four institutions of business, government, NGOs and media, showed a seven point drop for Ireland to 39 points. This places Ireland as the third least trusting country of 27 surveyed.

NGOs in Ireland remain the most trusted institution, despite falling five points to 58pc.

Business is the second most trusted institution in Ireland, but still suffered a three point decline to 41pc. The technology sector (67pc) remained the most trusted industry sector, while banks were the least trusted at 19pc.