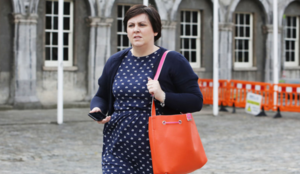 Judge Peter Charleton closed his eyes and appeared to rest his head, allowing it to hang down in front of him, for several noticeable moments while listening to a witness give evidence.

At the time Mr Charleton rested his head, she happened to be repeating that she couldn’t recall her contact with Sgt McCabe’s Tusla file in April and May 2014.

Specifically she couldn’t recall her involvement, if any, in Laura Connolly’s sending of a Garda notification containing a false allegation of rape against Sgt McCabe to Tusla and Ms Connolly’s acceptance that Ms Argue directed her to open intake records on four of Sgt McCabe’s children, two of whom were over 18 at the time, on April 30, 2014.

Readers will recall how Ms Argue has previously been referred to in the tribunal by other witnesses who’ve given evidence, including Ms Connolly.

Ms Connolly has already told the tribunal how, on April 30, 2014, she plucked Sgt McCabe’s unallocated file randomly from a filing cabinet and sent a Garda notification with a monumental error as her notification contained an amalgamation of Ms D’s ‘hide and seek’ allegation with that of a rape allegation which pertained to neither Sgt McCabe nor Ms D.

It appeared that Sgt McCabe was accused of raping Ms Y during a game of hide and seek.

Ms Connolly – who also told the tribunal “I have no recollection of any involvement in this case” – told the tribunal the files would have been left in a referrals tray for Ms Argue but, despite this, they were not discussed at the following weekly referrals meeting and there was no action recorded.

Ms Connolly told the tribunal she couldn’t recall discussing Sgt McCabe’s file with Ms Argue on that day. The two women’s offices are on the same floor.

Last week, Mr McDowell asked Ms Connolly who would have decided which files were to be discussed at the weekly referrals meeting, and Ms Connolly said that was the decision of the social work team leader. Asked if that was Eileen Argue, Ms Connolly said, yes.

Another witness to have mentioned Ms Argue is Laura Brophy.

Ms Brophy was the RIAN counsellor who was the first person to mistakenly conflate a 2006 allegation of inappropriate touching by Ms D against Sgt Maurice McCabe with an unrelated rape allegation when she referred the matter to Tusla in August 2013.

She sent this referral to Tusla, thinking it just contained Ms D’s 2006 allegation, even though Ms D’s allegations had already been referred to the HSE in 2006/2007.

Ms Brophy previously told the tribunal how she had trouble contacting Ms Argue when she first learned of the error on May 14, 2014.

Ms Brophy hand-delivered a letter outlining what had happened but, according to Ms Brophy, as she couldn’t get a hold of Ms Argue she couldn’t enquire about Tusla’s communication with the gardai.

On May 20, Ms Brophy emailed Ms Ward again to tell her she was still waiting to hear back from Ms Argue about Chief Superintendent Sheridan and the gardaí’s knowledge of the mistake and the actions taken.

Ms Argue told the tribunal she couldn’t recall if she knew Sgt McCabe, has very little recollection of events pertaining to Sgt McCabe and said all her information is based on her review of the files for the purposes of the tribunal.

She was reminded that she, like area manager Gerry Lowry, had attended several child protection conferences with Sgt McCabe and they were both even assigned to the same CORE meetings in relation to particular cases in 2006, 2008 and 2009.

Readers will recall Ms Lowry also told the tribunal he couldn’t recall being at the same meetings as Sgt McCabe, even though he chaired them.

Ms Argue was also reminded of a meeting of social workers on April 24, 2007 where Ms D’s allegation and Sgt McCabe were discussed.

Sgt McCabe was never met by a social worker.

Ms Argue was asked if she read stories about Sgt McCabe in the media in 2014 and if she knew if he was regarded as a whisteblower. She said she remembered some mentions of Sgt McCabe but couldn’t recall the context of those reports.

Asked when she did see or hear the media reports, did she link the Sgt McCabe mentioned in the press with the Sgt McCabe she shared meetings with from 2006 to 2009, she couldn’t recall.

Asked about her involvement with Ms Connolly’s actions pertaining to Sgt McCabe’s file – the sending of the Garda notification and the opening of the child intake files – Ms Argue said she can’t recall any specifics but, at the time, they would have been looking at many unallocated cases with tasks outstanding.

Readers will recall how the tribunal has already heard that a handwritten comment left by Keara McGlone on the file – in August 2013 – stated: “duty to guard notify and await assessment of allocation”.

The tribunal has also previously heard of a post-it note on the file which stated: “Duty to notify allocation to AGS and file in the cabinet, Eileen.”

When Ms Connolly was asked if this post-it prompted her to send the Garda notification in April 2014, she told the tribunal: “it’s a possibility”, adding that she first heard of the post-it note when she was interviewed by the tribunal’s investigators earlier this year.

This afternoon, it was put to Ms Argue that this post-it seemed to be a direction given by her.

Ms Argue accepted it was her handwriting but couldn’t recall writing it.

Ms Argue was also unable to recall if she reviewed Sgt McCabe’s file at that time.

“I don’t recall if I read the file. It looks more like I looked at the intake record. It was more likely, at that time, that that is possibly what happened. I can’t be 100% certain.”

The tribunal has already heard of a note Ms Connolly sent to Ms Argue in which she outlines that Sgt McCAbe had four children – two aged under 18 and two aged over 18 – and asks Ms Argue how she should proceed.

The tribunal has heard of another note from Ms Connolly which states:

“I don’t recall giving that direction. I don’t believe that I would have directed for two intake records for two children over 18.”

Asked if she is now doubting Ms Connolly’s evidence, Ms Argue said she wasn’t saying that but she doesn’t recall these notes and doesn’t believe she would direct anyone to open files on people aged over 18.

Ms Argue also couldn’t recall a letter she recieved from Laura Brophy outlining the error she made.

“I’m not saying I didn’t receive it but I don’t recall receiving it,” she said.

In relation to the amended Garda notification in May 2014 – created after Ms Brophy made Tusla aware of her mistake – Ms Argue was reminded of how it still contained one of the three incorrect sentences that Ms Brophy had added to Ms D’s file, namely that the perpetrator threatened to hurt Ms Y’s father if she spoke out.

Asked if she accepted this was a very sloppy amendment, Ms Argue replied “In what way?”.

Given that Ms Brophy sought all copies of the incorrect file to be returned to RIAN, Ms Argue was asked if she arranged this but she said she can’t recall.

Ms Argue was asked if there had been gossip or rumours in the Cavan social work department about Sgt McCabe.

She said she couldn’t remember specifically and that conversations tended to be of a personal nature and not what was going on in newspapers.

He put it to Ms Argue that she attempted to mislead the tribunal’s investigators by failing to mention, in her statement, that she had been consulted by Ms Connolly when she was creating the Garda notification and the intake records on Sgt McCabe’s children.

Ms Argue couldn’t recall but said, at the time, they were dealing with unallocated cases in the ‘Measuring The Pressure’ system they operated.

Mr McDowell suggested instead of the Measuring The Pressure system, perhaps, a little bit of pressure had come on her to deal with the file as nothing had “budged” in nine months.

Mr McDowell suggested somebody might have gone to her and asked what’s happening to the Sgt McCabe file. She said she didn’t recall anybody going to her about the file.

Judge Peter Charleton listed a sequence of events to Ms Argue before Sgt McCabe’s file was dealt with on April 30, 2014.

These included former taoiseach Enda Kenny getting a dossier of allegations compiled by Sgt McCabe in February 2014, Irish Independent journalist Paul Williams calling to Ms D’s house and interviewing her; former Garda commissioner Martin Callinan resigning in March, Paul Williams writing further articles in April; Ms D making a complaint to GSOC (which subsequently found there was no case to answer) on April 29, 2014 and then “lo and behold” Laura Connolly plucking Sgt McCabe’s file from the cabinet randomly the very next day.

Ms Argue repeated that, at the time Sgt McCabe’s file was revisited in April 2014 – the first time since August 2013 – they were looking at unallocated cases and Sgt McCabe’s was such a case.

At the very end of Ms Argue’s evidence yesterday, Mr McDowell reminded the tribunal that after Ms D made a complaint against Sgt McCabe in December 2006, the gardai were obliged to contact the HSE which they did.

The person to take the call from the gardai, regarding this notification, was Ms Argue.

Readers will recall that the tribunal has already heard that the social worker who wrote an acknowledgment letter to the then superintendent in Baileboro Garda Station pertaining to the same allegation by Ms D, on January 2, 2007 was Gerry Lowry.

Earlier: ‘I Don’t Know If It Was Through Intention. I Can’t Explain It’

Previously: Another Day, Another Error