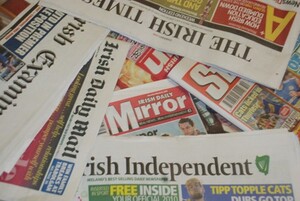 Lecturer in Political Science at Dublin City University, Eoin O’Malley has looked at the Irish newspapers’ coverage of the 2011 general election and compared it with research from the 2002 and 2007 elections.

He found that, after a sizeable downturn in coverage of policy issues between 2002 and 2007, 2011 saw a resurgence in policy coverage [table above].

“In the last few days of the 2012 US Presidential election 20 percent of traffic to the New York Times website went to Nate Silver’s blog analysing opinion polls. For some this was a trivialisation of an important decision that the nation was making.

Poll analysis is usually thought of as treating an election or politics as a game or sport and is discussed in the same way. Ireland appeared to be following this trend; policy coverage in the Irish Times during the short election campaign fell from about 60 percent in 1973 to close to 30 percent in 2007.”

“In a paper written with Heinz Brandenburd, Roddy Flynn, Iain McMenamin and Kevin Rafter that is forthcoming in European Political Science Review, we suggest a number of media and political factors. Commercial pressures make it more difficult to produce comparatively expensive policy analysis that appeals to fewer readers.

Coverage of elections as sport is cheap to produce and easy to read. The increase in opinion polling will also feed this. There is also a norm in Ireland against partisan bias, which makes covering elections as a ‘game’ preferable, because discussions of the substance of policy issues might make it more difficult for the journalist to hide any policy preferences they hold.

Where there is a narrow policy space, as in Ireland, discussion of policy may seem pointless because there aren’t competing policy ideas out there. And in a majoritarian political system where there are clear winners and losers in elections, it is easier to cover elections in this way. All of which points to Ireland continuing this trend to less policy coverage.”
…
“We carried out extensive coding of press coverage of the 2011 election, which supplemented the coverage Brandenburg had earlier carried out in 2002 and 2007.

We observe the long term trend of decreased policy coverage dramatically reversed. Policy coverage in the election-related articles increased across all papers we have data from earlier elections.”
…
“We also see that coverage is on what we would expect it to be if the economic crisis caused the increased election coverage.” 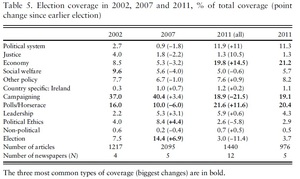 “Sen (1999) and many others argue that democracy can prevent catastrophes because policies are observed and questioned earlier by a free press and other institutions. That the Irish press moved so firmly to cover policy in the 2011 election might support Sen’s (1999) argument.

So we could have a less pessimistic outlook on the press than other commentators have had: the media can be responsive and responsible.

Unfortunately this attention came too late to prevent the economic collapse as, like elsewhere, the Irish media did not discuss or question the policies that ultimately provoked the crisis.”