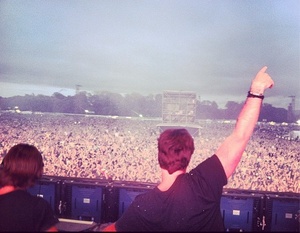 And probably even electric.

The Garda Commissioner Martin Callinan has presented his report to the Minister for Justice , Equality and Defence. The nature of the concerts held in the Phoenix Park on the 5th, 7th and 8th of July 2012 were such that they attracted a different cohort of patrons each night.

The Thursday night and Sunday night concerts passed off from a policing perspective as predicted during the planning stages for these events.

The concert on the Saturday night (7th July) however didn’t have such a predictable outcome. In that context the review conducted by An Garda Síochána has highlighted a number of matters that need to be addressed in future planning of large outdoor concerts of similar nature.

An Garda Síochána are engaged with the concert promoters and other stakeholders to ensure the implementation of the recommendations contained in the recent review, so that all patrons can enjoy and have a positive experience when attending such events.