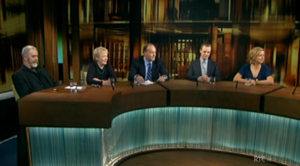 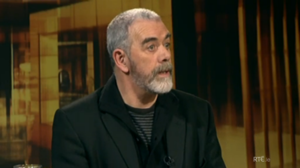 Not a poem but a crafted monologue that literally (as we used to say on the ‘sheet) rhymed with the mood of the day. It was also one of the sheet’s earliest transcripts.

Mr Dorgan spoke on the evening of the election – Friday, February 25, 2011 – on RTÉ’s The Eleventh Hour, hosted by Daire O’Brien as the count was under way.

Daire O’Brien: “Are we on the cusp of a big change here, Theo?”

Theo Dorgan: “I think we’re going through a great change. I think the Irish people have dealt the first decisive blow to the old politics. The biggest political party and the biggest political organisation on the island has been dealt a death blow. And next time out the exact same thing will happen to Fine Gael.”

Dorgan: “No no. No unless. I’m absolutely predicting this. Nothing in this election has persuaded me that Fianna Fáil, Fine Gael or a great chunk of Labour understands just exactly truly a) how desperate the situation is, b) how powerless the old politics is to deal with it, and c) what’s coming down the line behind Dylan [Haskins] and the other young candidates, the other young Independent candidates especially, who are coming.

“I think Fianna Fáil is a dead piece of roadkill at the moment. It’s only hope is that the great lost leader of the Labour party, Mícheál Martin, takes a decisive leap to the centre and to the left and recovers its 1930s roots.

“Fine Gael is going to absolutely lose the run of itself in office, and it’s already riven with contradictions; you have Lucinda Creighton saying the basic rate of tax is 55% and Michael Noonan saying that this is bizarre when Pat Rabbitte repeats it in the Dáil.

“There is going to be, I think, a decimation of Fine Gael the next time out. People are going through a very strange, slow-motion crash of the State. They’ve dealt with one of the great monoliths. They’re now scrupulously giving the other monolith in the old politics its shot, and when that proves itself – as it absolutely will, I’m completely certain of this – a busted flush, then the new politics will happen. So it seems to me this is an interim moment in a long, unfolding process of change.

“And the crucial thing is, actually in a strange way, to ignore the State over the next two to three years, and resume and deepen the debate on civil society that was temporarily interrupted by this.”

“It’s not just the political system. It’s the self-appointed political class. There’s a managerial approach to the Republic. There’s a distinction now, a profound and unhealthy distinction between the State and the people and, in there, the idea of the Republic has got lost… You now have a line-up, an alignment, between senior managers in the public and private service, senior managers in the private sector, senior politicians, senior civil servants and senior media figures – who have a sense that we, between us, know what’s going on and you are the little people. Now the actuality, when you look at it, is the rather embarrassing spectacle of Enda Kenny rushing over sort of to kowtow to Caesar, to Angela Merkel, without having the brains to realise she’s on the way out…there is a subservient strain in the Irish political class because, objectively, it has to be described in a comprador and a colonised situation and, yet, we’re not. So that contradiction is going to widen and deepen.”

“If you look at Dylan’s website, you’ll see a model of how the new politics is going to go, it’s interactive, through a campaign.”

Later (when asked for reasons to be optimistic)

“Precisely the generation that’s rising up. I’m constantly, I always find you can go back to Bob Dylan for a quote. When he says, ‘When you’ve got nothing, you’ve got nothing to lose’ which I’ve always found, as an impoverished artist, a very useful mantra. He also says, ‘Something is happening and you don’t know what it is, do you, Mr Jones?’.

I think this generation [points to Dylan Haskins] knows it. And I’ve found what, you know, travelling the country in the last four or five years, there are, it’s actually a new way of thinking is struggling to be born and it’s not ready yet to be cut off at the neck and co-opted by the spinmeisters and by the image consultants. Incidentally, very old ways are coming back as well. We still have that feel for the prophetic insight and I offer you one, in light of the election. Today, in Salthill [Co. Galway], the school, the polling booth at St Enda’s National School, the floor collapsed, there’s a harbringer – the floor of St Enda’s National School…We’re at the diagnostic stage, we have to diagnose what’s wrong before we can talk about it.”

“A large turnout in a general election is people reclaiming their democracy. It’s absolutely true that there was a big revenge component in this but I think it’s a big mistake to think that that’s all there was. People have been drilled and educated in the issues and they’ve said, ‘you’ve made a mess of it, step aside’.

But the sights of the exact same people who voted for change, apparent change, today, will now be on the same government with the same lack of mercy for bullshit and lies and spoofing. And I’m waiting, will it be a week or two weeks before, “oh, if we’d seen the books, we’ve had said differently…” There’s a dreary predictability about this but the people are waking up.”