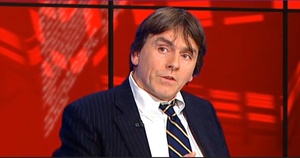 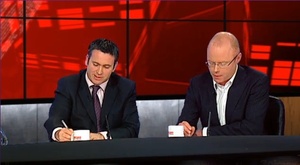 To discuss whether recent ‘good’ news on our bailout repayment terms was genuinely good or more sugar-coated government spin.

You know how this ends.

Stephen Donnelly: “The Fairer Sharing {FG manifesto slogan] actually went backwards today. There were two announcements today and I, honestly, am getting sick of listening to myself bursting the good news bubble, because I keep doing it. But the Government…”

Damien English: “There is a bit of some good news…”

English: “OK. I don’t want to burst his bubble.”

Browne: “Try and do your best now.”

Donnelly: “There were two relevant announcements today. The first was we will hopefully get an extension on the payback period for this money from the EFSF. That’s worth about €50million a year. €50million is welcome.
€50 million is reduced borrowing. But it’s not a lot of money. It’s €50 million a year. The second announcement, which Noonan made today, which has not made the headlines is on the real negotiation which is the ESM recapitalisation of the banks.
Noonan admitted today that the risk taken on by the recapitalisation would remain with the sovereign. In the July 2012 announcement, remember the 4am announcement? They said ‘fantastic news’…”

Donnelly: “The ESM, this is the game changer, the ESM will recapitalise the banks. Great news. Except the German Finance Minister came out the next day and said ‘sure, but the risk associated with the banks in every country will stay with the country’. Now, I and Damien and everyone else said ‘oh no, it won’t, because we have to share the burden’. Now, Noonan today said ‘actually, it will’. So the big negotiation was on the ESM and the bad news there was ‘yeah we’re not going to get what we thought we’d get, we’re gonna get what the Germans said we’d get the day after the announcement. By the way, on this other thing, I’ve managed to get us this €50million a year. So that’s what happened today. It was very good media manipulation, in terms of burying a really bad news story behind a small good news story.”

Paul Sommerville: “I would agree with Stephen, that it’s a huge PR exercise. That’s been what’s happening for the last year or so. Really what we’re doing is softening up the Irish people to bail out Number Two. That’s basically what’s happening. So the plan, all the way for Europe, we’ve talked about it for years on this show, is going exactly how the Europeans want it to go and it hasn’t deviated at any point in time. We’re just playing around with the PR side of things.
So what they’re saying is, ‘Your debt is unsustainable, Portugal’s debt is unsustainable, so we’re going to do something, we’re going to throw you a bone of some description’ And that’s what they do every single time that we go along. So, for the Government to say, that they wouldn’t have a second bailout, this is basically what they’re doing.So they’re going to try and stand behind us in all different ways, we won’t even go into the complicated ways, but it might save us a little bit of money. Yeah, it’ll definitely save us a bit of money. And so obviously the Government can claim that it’s somewhat good news.
But you can’t take this as good news because the financial institutions around Europe have really played Ireland for fools, the Irish people for fools. And they are continuing to play this same thing for the European population as well.
And Damien says, and I heard Brian Hayes going on about this today aswell, Fine Gael have someway brought our debts, or our yields on our debts down from 14% to 4%, it’s something to do with them. It’s absolutely nothing to do with what is happening in the domestic economy. And it’s nothing to do with our Government.
What the Central Banks have done, is they’ve flooded the whole world with cash and traders are doing exactly what they were doing in 2007 and they’re taking this money and they’re betting on everything that moves, that’s why you’ve seen food prices go up, you’ve seen oil prices go up. The stock markets are at a five-year high. Bond yields, across the world, on every single thing you can buy, are falling. And the reason being, is that they’re allowed to gamble with absolutely every bit of cash that the Europeans are shoving into the banking system.
So it’s nothing to do with the Irish people. It’s nothing to do with the European people, it’s not going to help. But what it does help is lots of bond traders and it helps lots of financial institutions.”

Sommerville: “Ireland…we keep thinking we’re getting deals of some description. The only reason the Europeans are turning around to us now and giving us this is because they’re very afraid that the Irish people, or the Portugese people, or the Greek people are going to do something about it. So they’ve got to throw you a bone of something every so often to keep down. So this is exactly how the system works. The financial industry is absolutely, like, drinking champagne on the back of everything that is going on at the moment.”