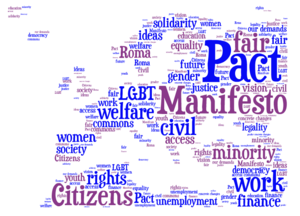 The European Parliament elections will take place across European member states between May 22 and 25 next year.

Ahead of this, an organisation called European Alternatives is looking for European citizens’ input into creating alternatives to the way the EU is currently organised.

“Three years ago the European Alternatives started a series of citizen/public consultations based on the world café methodology to ask people what they really thought about certain topics, such as immigration, work, Roma people, LGBT, legal and financial reform.”

“The world café uses the same principle as the Constitutional Convention in Ireland whereby citizens gather at a table with an expert and a moderator. They are explained the topic of the day (for instance ‘work’ and each table discusses an aspect of it, such as ‘contracts’, ‘harassment at work’ and they, in turn, come up with proposals.

“These proposals were then handed to EU experts (academics, policy developers) who rephrased them to compile them in a document (the Manifesto) which was presented to the European Parliament this week.

“Beforehand they also organised Mani(fests)in 10 big European squares, where they asked passers-by what they thought of the proposals. It’s a citizen document from A to Z because the proposals, once rephrased by experts, were voted on again by citizens. The proposals presented in the current document are the ones which were the most popular.”

“It’s a work in progress as they would like this manifesto to be updated every two years so that more and more citizens become involved.”

Pic: A word cloud of the words that appear the most in the manifesto