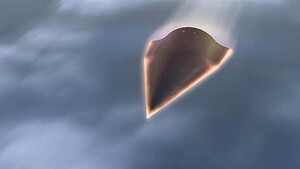 If all goes well, the Falcon Hypersonic Technology Vehicle II will launch today from Vandenberg Air Force Base, near Los Alamos, California, and splash down nearly 4,900 miles away — and 30 minutes later — near The Marshal Islands, according to the aviation site Avweb.

The arrowhead-shaped glider is a vehicle that will be attached to an eight-story-tall Minotaur IV rocket. It is part of a system intended to reach speeds of up to Mach 20 to deliver a military strike anywhere on earth within one hour.

Today’s test will launch the Falcon into the Earth’s upper atmosphere where it will cover the bulk of the 4,900 mile journey. If all goes well, it should pass Hawaii about 15 minutes after leaving the California coast. Near the end of the trip, the vehicle will make a sharp descent into the atmosphere and then level off. If proven, the system could cover the distance from Los Angeles to New York in 12 minutes. A previous test saw the vehicle travel for nine minutes before controllers lost contact. Data collected from the new test will be used to “confirm theory and expand knowledge of hypersonic flight”.