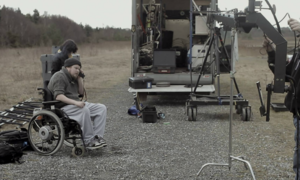 When he was 17, he became paralysed following a car crash on the way to his construction job on Monday, October 14, 1996.

On the morning of the crash, the van in which he and his workmates would normally travel in was being repaired and they got a lift from a stranger.

In a radio interview with Colm Flynn for BBC World Service, Paddy explained how the crash happened and how, ultimately, it led to him becoming a filmmaker.

“Funny enough, a strange car pulled up beside us and literally let down the window and said, ‘do yiz want a lift, lads?’. I was thinking, ‘this is a miracle’ because the chances of that happening for three people, three strangers… And, I swear to god, I’m not just saying this for the sake of saying it. But I remember getting in, I didn’t recognise the driver and I remember thinking, ‘I should put on my seatbelt’.”

“And I literally, for a few seconds, in my mind I was thinking, ‘oh maybe I will, maybe I won’t. I remember saying, ‘you know what? I won’t put on the seatbelt’ because this driver beside me, I didn’t know who he was from Adam, but I knew he was kind of young enough and I thought, ‘jeez, maybe I’ll offend him’ if I put on my seatbelt.”

“As we were going to overtake [a] van, the van happened to pull out to overtake a tractor which was parked on the lefthand side of the road and I knew we were running out of road.”

After he was told he was paralysed…

“There was no anger, no resentment. I don’t know, an amazing thing happened. When your body switches off, well at least for me, my imagination actually switched on and that’s when I literally began a process of self-discovery, understanding who I actually really was – that’s where I discovered the possibilities I suppose.”

“The boundaries started to withdraw and the canvass became blank again and I started, I guess, to paint my own picture of what I thought life was all about. My own imagination, my own power of attention could alter my physical reality, not just that but also physically heal certain wounds.”

“…Essentially, for two or three years, my life after that accident, I was 24/7 being looked after, I had people around me all the time, no privacy and I really valued my private space.”

“So I’ll be honest with you, I was given a gift of a keyboard at that time with a piece of paper and I was set up in a little room in my house and I was basically left to my own devices and I was sitting in that room and I started literally expressing myself like, I don’t know, nobody’s business. I just constantly had so much to say and that was my channel for saying it.”

On his award-winning short, The Moment…

“…I had spent a lot of time in hospital, I was put in a geriatric ward which basically means I was in a ward with a lot of older people. Now I could look across the way, through the gap of a curtain into another guy who was in a bed across from me, an old guy. Now I didn’t realise at the time but he was in the process of passing away.”

“Tragically, there was no visitors, only a nurse who sporadically popped her head, in and out of the curtain, and that was it, he was wheeled out at two o’clock in the morning.”

“I felt, here’s a guy who just went through the process of the second most important part of his life, there was no one there to celebrate or even remember it with him and my heart was broken for this guy. So I sat down and wrote this little short story, called The Moment about basically the last ten minutes of this guy’s life.”

“I got very lucky, I sent the script to a guy called Mark McAuley, a BAFTA-award winning cinematographer. He calls me one day, out of the blue, and says, ‘Paddy, I printed out your script and I read it out to my family at the breakfast table and I’m blown away by it, I want to make this film with you’. And I said, ‘Mark, I’m afraid I can’t afford you, I was chancing my arm sending it.’ He said, ‘forget about the money, I’ve a few connections, let’s make this film’.

“We made the short film and suddenly it takes me all over the world, I think it was screened in over 50 different film festivals around the world, it won awards in Mexico, Africa, India, it was nuts. It was a story that basically translated to every audience…”

Listen back in full: “My body switched off but my mind switched on” (BBC World Service)