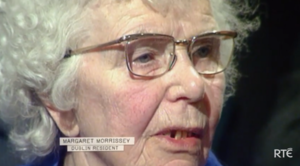 The third and final episode of 1916, narrated by Liam Neeson.

“The clip, above, features footage of Margaret Morrissey, a Dublin resident, talking about seeing her father being buried in a mass grave at Glasnevin following the Easter Rising. The final episode of 1916 deals with the surrender and subsequent executions of the leaders and the fundamental changes arising from these events.”