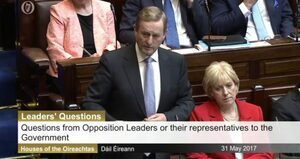 She recalled the breath-test fiasco and the meeting of the justice committee, in October 2016, when Ms O’Sullivan repeatedly said:

“I’m not privy to, nor did I approve, nor would I condone any campaign of harassment or any campaign to malign any individual employee.”

Ms Daly said she had seen information showing that, in September 2016, written reports were being sought for Ms O’Sullivan about the alleged bullying and harassment Garda whistleblower Nick Kehoe was enduring.