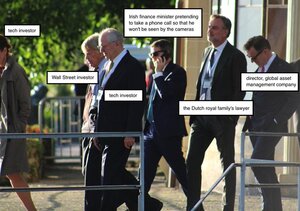 The immediate significance of Paschal Donohoe’s (Irish Finance Minister) elevation to the Presidency of the Eurogroup? Death knell to any thoughts of corporate tax harmonisation in the Eurozone and the EU. In short, business as usual at a time we cannot afford business as usual

Euro zone finance ministers reached a compromise on Thursday to break days of stalemate over how to respond to an economic downturn that threatens to be the worst since the Great Depression in the 1930s.

Under the deal, which amounts to €500 billion in a range of tools, states can borrow from the European Stability Mechanism bailout fund to finance spending needed to overcome the crisis.

…But it dashed the hopes of Italy, Ireland, Spain and six other member states that had called for eurobonds to bring down borrowing costs and send a signal of unity as the continent confronts a health crisis that threatens to become an economic disaster.

He said it is very possible that Ireland will need to access funds from the European Investment Bank to help fund companies and will consider whether to access the programme to help fund wage subsidy schemes.

It is hoped that it will not need to use the fund from the European Stability Mechanism, he [Finance Minister Paschal Donohoe] added.

He said a new Government in Ireland must have a stable majority but must reflect the hopes and fears of the electorate when they voted.