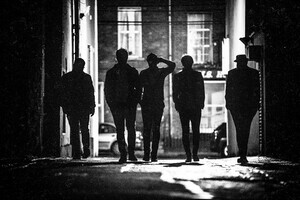 01. It’s been a long road for the folk-informed alt-rockers formerly known as Fox Jaw Bounty Hunters.

02. Over three-hundred shows, two full-lengths and a rash of singles and E.P.s, the lads have traipsed across Europe and America, completing the Irish festival-grind checklist in the process, including Castlepalooza, Knockanstockan, and Indiependence, among many others.

03. Streaming above is the video for most recent-single Hit It Off, a slower-moving number indicative of their rock ‘n’ roll leanings, with a promo featuring a Munster fan having a terrible evening altogether (possibly NSFW). It’s taken from their next E.P., Black Light Vignette.

04. See them next at Electric Picnic‘s Electric Side Show stage, or if you’re in Limrock, drop in to Dolan’s on the 17th of next month for their tenth-anniversary/record-launch proceedings.

Verdict: Heads-down, no-nonsense rock ‘n’ roll, well-honed over the years and the result of obvious passion for their craft.