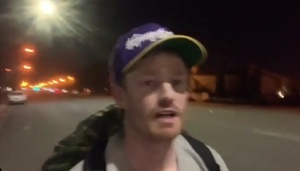 This is a mate of mine Frank Cronin. He’s a standup comedian from Dublin, who’s living and working in the US.

He’s just embarked on an adventure, walking from San Francisco to LA , sleeping rough and stopping off along the way to perform stand up sets.

He has form doing this sort of thing, having lived in a tent for a year at NUIG while he finished his degree .

So far, he’s had to contend with a gammy leg, nearly losing his eye, and met a lot of interesting people along the way.

All the while, he’s raising money for homeless charities too and raising awareness for the plight of those without a home.

It would be great if you could give a shout out to him, as it’s fascinating stuff – and strikes a chord here at home, where so many people are suffering this Christmas too.