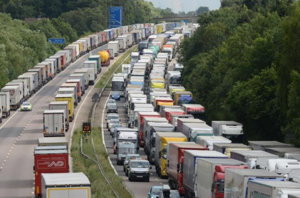 Traffic on the M20 in Kent, south-east of England this month

Operation Stack is a traffic control measure used in Kent, south-east England that sees trucks parked on the M20 during cross-Channel disruption.

It was recently enforced because of industrial action by ferry company MyFerryLink and because of migrants trying to access Britain via the Channel Tunnel.

This morning, the Freight Transport Association of Ireland writes:

Ireland must seek compensation for Irish hauliers affected by the Calais disruption, the Freight Transport Association of Ireland says today. FTA Ireland has previously written to the Minister of Foreign Affairs and Trade, Charles Flanagan, about the disruption caused by Operation Stack in Kent, and by the serious situation drivers face when entering the Port of Calais.

According to FTA Ireland, the cost to those hauliers stuck on the M20 in Kent was millions of euro during the 28 days that Operation Stack was implemented between 23 June and 2 August 2015. Many of these hauliers were Irish operators, transiting the UK to access Northern Europe.

The estimated cost does not include loss of business, spoilt cargoes, missed export deadlines or the added costs of diverted journeys during Operation Stack. FTAI members have estimated the additional cost of a diversion via Rosslare-Cherbourg to be a minimum of €300 per trip.

Neil McDonnell, General Manager – FTA Ireland, said: “We are calling on the French Government to compensate operators. The MyFerryLink industrial dispute has not been resolved and further industrial action is likely before the summer is out. Much of what we have seen around the Port of Calais goes far beyond what anyone could call lawful industrial action.”