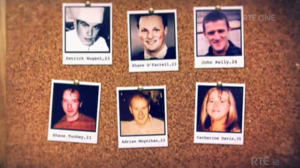 You may recall the independent review panel set up by Justice Minister Frances Fitzgerald in July 2014, following the publication of the Guerin Report which looked at allegations made by Garda whistleblower Maurice McCabe.

The purpose of the panel is to investigate allegations of Garda misconduct, crime and cover-up and to ascertain if further investigations are needed.

Some of the cases involve the deaths of individuals.

Last night, on Prime Time, political correspondent for RTÉ’s Current Affairs Department Katie Hannon presented a report on the work of the panel.

“320 cases were ultimately accepted for review. 17 months later, 152 families have received a response to their complaints. The Justice Department would not confirm what was in those responses, saying the minister will issue a comprehensive statement when the process is complete. However, we know that, of the first 120 cases reviewed, the panel recommended that no further action was warranted in 105 cases. Just nine cases were referred to GSOC for investigation while the minister sought a report from the Garda Commissioner in six other cases.”

The families of all these people are not satisfied with the review panel.

In her report, Ms Hannon tried to find out exactly what information the review panel is reviewing.

It wasn’t an easy task, as Ms Hannon discovered.

Ms Hannon explained that, in July 2015, Justice Minister Frances Fitzgerald had told the Dáil that the panel has access to information from the gardaí and GSOC.

On foot of this, Ms Hannon said, some families contacted GSOC to ask if it had made files pertaining to their cases available to the review panel.

But GSOC responded saying it didn’t because,

“The independent review mechanism is a non-statutory mechanism and, as such, it is not entitled to request or receive from GSOC files and documentation relating to complaints made to GSOC.”

In turn, Ms Hannon asked the Justice Department if the panel had the authority to access the Garda files.

The department responded by saying,

“The Gardaí fully co-operated with requests for information in connections with the cases referred to the panel.”

Ms Hannon asked again, repeatedly, if the panel had access to the Garda files.

“A spokesman for the minister declined to say and pressed he would only repeat the Gardaí fully co-operated with requests for information.”

However, the Justice4All group says it’s not aware that the panel asked any family for further information.

In fact, Ms Hannon reported, the family of Shane Tuohey were turned away when they tried to give the panel further information. The new information was based on CCTV tapes that turned up after the family was originally told they were missing.

The panel told the family,

“The examination of any evidence in the context of a criminal investigation is an operational matter for the Garda Commissioner.“

It should also be noted that the panel did not hear any oral evidence.