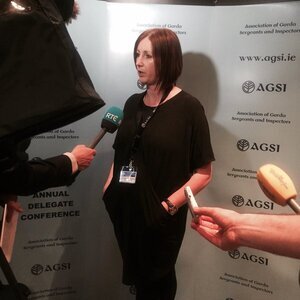 President of the Association of the Garda Sergeants and Inspector Antoinette Cunningham; and with Garda Commissioner Noirin O’Sullivan

The new president of the Association of the Garda Sergeants and Inspector Antoinette Cunningham spoke to Seán O’Rourke on RTÉ Radio One this morning.

They discussed the AGSI members’ plans to protest next week over pay and their willingness to take industrial action if needs be.

They also talked about the O’Higgins’ report, Sgt Maurice McCabe’s allegations and Garda Commissioner Noirín O’Sullivan’s allegation to the inquiry that McCabe told two officers he was acting out of malice.

The allegation was proven to be false after Sgt McCabe produced a recording of his conversation with the two Gardai.

Antoinette Cunningham: “I can tell you Seán, from our conference and our mood on the ground, I can tell you that we are prepared to go as far as we have to go. Next week we have a march, we will picket the Dáil next week, as a national executive from AGSI.”

“The week after that we will move on to picket the Office of the Minister for Justice and the Taoiseach. We will do whatever it takes for us to highlight our cause around pay. It’s not a desirable position, it’s not what we want to do but I would like members of the public to understand, we don’t want to try and affect services to the public but we have to try and highlight our cause in some form and sadly this is the last one that’s left.”

Seán O’Rourke: “The O’Higgins’ report published last week, looking into claims of corruption and malpractice made by your colleague, Sgt Maurice McCabe. One of the things the report did was highlighted the ill treatment he received in the force after he spoke out. Now, do you think, or do you agree with the suggestion that An Garda Siochana is a cold house for whistleblowers?”

Cunningham: “Well, first of all, I’m not going to comment on any individual, Seán. But I will comment on a general basis in relation to whistleblowing. And I think, look, organisations like An Garda Siochana, have a responsibility to ensure that people who do want to make disclosures within the organisation have a safe environment to do that. I know that the Protected Disclosures Act of 2014 brings in the guards within that and I think, you know, there shouldn’t be any fear or repercussions made by anyone who wants to report corruption or malpractice in any organisation, including An Garda Siochana.”

O’Rourke: “There was one thing which I think a lot of people were disturbed by. Now, in a sense, it’s difficult for people, particularly like the Garda Commissioner to comment because there is a restriction on what can be said or revealed about what emerges and exchanges add something to like a Commission. But nonetheless, it has emerged into the public arena that senior counsel for both the Commissioner and indeed members of the force suggested that Sgt McCabe had been acting with malice and that evidence would be brought to that effect. But then when it transpired that Sgt McCAbe had had a recording of the exchanges in which this malpractice was alleged to have been given voice to by him, that just vanished. Now does that concern you?”

Cunningham: “Well, I think, look Sean, the Commissioner has, at this stage, not commented on that so it would be remiss of me to try in any way to comment on that matter. What I would like to talk about in relation to…”

O’Rourke: “No but do you think we should know more? Or is it good enough that, and I wouldn’t accuse the Minister or the Commissioner of hiding behind a law, which is her duty to uphold, but nonetheless, would you accept that there should be some forum for clearing the air about this?”

Cunningham: “Well I think that’s a matter for the Garda Commissioner, Sean. I don’t think it’s, it would be appropriate for me to comment in relation to that.”

O’Rourke: “Is it not a matter for every citizen in this state? And you, as president of the AGSI, that such murky dealings appear to have been going on. At least that’s the suggestion, and we have to enter all sorts of caveats about this, it’s selective and we don’t know what the context is, but there appears to be a record which is the basis for this report by Michael Clifford last week in the Examiner.”

Cunningham: “Well I think if there is a murkiness or anything attached to it, Seán, that needs clarity, then it’s not for me to provide that clarity, it’s a matter for the Garda Commissioner.”

O’Rourke: “Well you could call for it thought?”