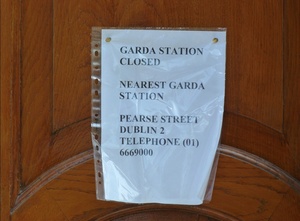 THE TWO biggest organisations representing Garda members have expressed fears the Government may use data indicating low levels of recorded crime at most Garda stations as a charter for further station closures.

The Garda Representative Association (GRA), which represents 11,200 rank-and-file gardaí in a force of 13,500, said further closures would damage policing and undermine public confidence in the force. The Association of Garda Sergeants and Inspectors (AGSI), which represents middle-management ranks, expressed its concern no research had been compiled on the impact of station closures.

See. There’s your problem right there.