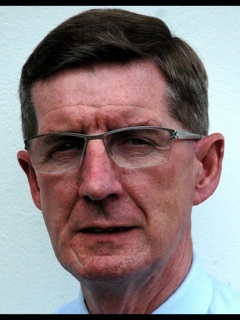 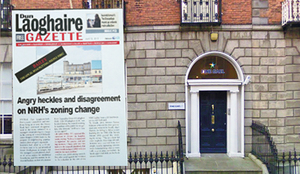 Further to the Lucan Gazette dirty tricks, Fine Gael politician Cllr John Bailey (top) used a mock-up of the Dun Laoghaire Gazette to promote himself among his constituents, without permission from the newspaper group.

“Cllr Bailey personally delivered a leaflet with a mock-up of the newspaper to the homes of around 300 people.

“The mocked-up version of the paper contained several changes to a story about Amgen and the National Rehabilitation Hospital (NRH) in Dun Laoghaire including putting a banner across the story reading Bailey – The Local Man Putting People First.”

“All of the changes put Cllr Bailey in the best possible relief and made it appear that The Gazette brand politically endorsed Cllr Bailey.

Previously: Here’s Lucan At You Kid

Boss I Made The Cover

Our pictures show him enter the outlet just before 9am. He lifts a stack of papers and takes them outside, before returning and taking further copies.

He then dumped the papers in a litter bin nearby.

The shop is situated yards from Mr Keating’s home.

And HERE‘s the story he/they tried to lift.

The TD’s aide, the school row and the vanishing pile of local newspapers (Niall O’Connor, The Herald)