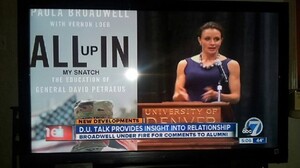 With much internet snickering about Paula Broadwell, her affair with General David Petraeus and the suggestive title of Broadwell’s Petraeus biography ‘All In’, the researchers of an ABC news station accidentally this week ran the story with a hastily Googled graphic of a Photoshopped cover of the book.

KMGH-TV producer Deb Stanley told Raw Story that the wrong book cover had been “mistakenly picked up off the Internet” and aired during their 5 p.m. broadcast on Monday. Instead of displaying the actual book cover of Paula Broadwell’s Petraeus biography, “All In,” KMGH-TV aired the parody cover, “All Up In My Snatch.”