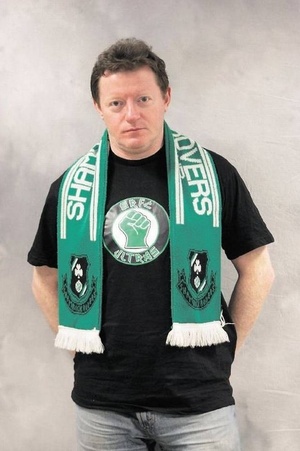 The RTÉ Radio documentary ‘In Search Of The Blue Nile‘ featuring Donal Dineen, Mark Cagney and Tom Dunne and  which Blue Nile singer Paul Buchanan dedicated to George – will air on BBC Scotland on Easter Monday April 17 at 4pm.

The rock doc , which has garnered praise from the likes of Peter Gabriel and Ryan Adams, is produced by George’s pal and colleague Ken Sweeney and is available in its entirety above. 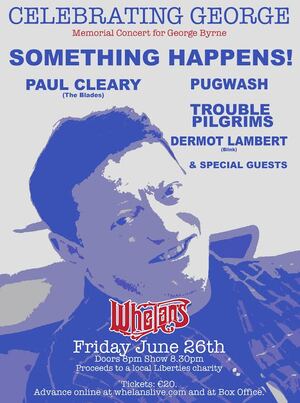 There may not be tay 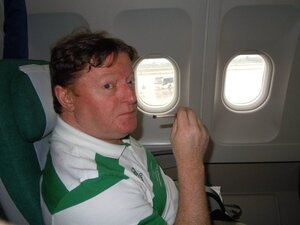 I met my friend John ‘George’ Paul Byrne’ or Ringo which he self-styled for himself as  it was the only name of the Beatles he wasn’t called (we smelled bullshit, but we let him away with it) on August 10, 1991.

Not everyone can say when and where they met their mates, but I can for the very simple reason that it was the day before my 21st birthday, and we were all off to Manchester for a weekend that was to include, my 21st, and a Ireland selection Vs Man United selection for Matt Busby’s testimonial match.

The preface to this, was that I’d recently become friends with one of his very best friends, Robbie Foy, through the ‘Yellow Pack gigs in the Baggot Inn on a Tuesday. Robbie called, said they had two spare tickets for that weekend in Manchester and was I interested?

Sure I said, I also have a mate Richie Evans, that was interested in coming along. and it was on that faithful morning in a Dublin Airport bar that Robbie Foy introduced me to George Byrne, Fiona Looney, Martin Moore and John Byrne. We all became instant friends that weekend, and they all remain some of my closest friends to this day. We argued 15 times that weekend, we made up up 15 times, and had 15 pints to seal the deal.

Lets put a marker down here, Ringo was a bollix. But as I explained to someone a few weeks ago, he was ‘my bollix’. It was that weekend that I learned about this and all the group’s passion for Shamrock Rovers. I Had been a causal observer of the Dublin team for years, during the whole sorry Milltown saga, but that weekend, they talked of NOTHING else, as so it came to pass, that a few months later I made my debut for Shamrock Rovers (sadly on the terrace, and in the bar).

Literally hundreds of away games and nights later, it was the bond that brought us together, but as we became friends, it was very suddenly obvious that we had another bond. Music.

What this man didn’t know about music, isn’t worth Louis Walsh’s bank balance. The very last night I was out with him on the Friday before his stroke, I got in the middle of a row with him and Martin Moore about Sweet’s number 1 hits. Ringo was right.. Martin was wrong.. I was the google referee.. He of course was delighted !

I’m sitting in a hotel room in Glasgow now typing this, and it’s hard. Wanting to be back in Dublin.. But its hard for another reason. I was supposed to go in and see him in hospital this week. I didn’t because I was too busy with work.

We’d waited ages for a chance to be allowed to go and see him as we’d heard the news wasn’t great. Finally we were told we could go in small groups. Robbie went in, but I waited. I waited too long. That hurts. BUT, I’m in Glasgow, hometown of one of his favourite bands ever, The Blue Nile, and I’m listening to them now.. and it’s just lovely.

1) Went to a bar in Glasgow because I REALLY needed a drink. Wavering between teary sadness and teary laughter reading all the stuff about Ringo online, when the barman asks if I’m OK. I very briefly explain. he nods. goes gets a whiskey. We both drink it and raise a toast to Ringo.

Then OMD [Orchestral Manoeuvres in the Dark], one of his old pals comes on. I burst out crying like a dick, then a random fella beside me asks if I’m OK.  Again I briefly explain.. ( i just wanted to get the hell out of there) and he insists on buying me a drink.

His name was John, and he was a lovely fella. So thanks Ringo, you blagged me two free drinks in Glasgow!

2) I just got a tweet from a friend in Australia, that reads. ‘So sorry to hear about George. Many great memories of the two of you in [Dublin pub] The White Horse, waving your [Rovers] scarves and opinions about!’ That’s him in a nutshell.

I haven’t even touched on his professional career.. and his huge amount of journalist friends that have paid far more lofty tributes [see links below] than I have. I’m just shooting of the cuff about my mate Ringo. The Bollix.

My heart goes out to his ma and Da, Kay and Mick, his sister Andrea, and his beloved Julie. 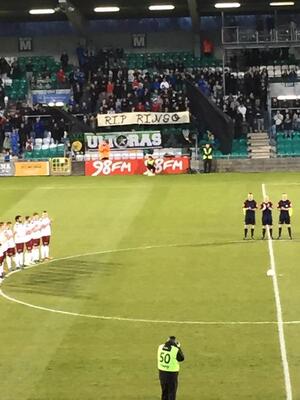 A two-minute silence ahead of the Shamrock Rovers VS Galway United League of Ireland match.

Shamrock Rovers remembers one of their own. R.I.P. Ringo.