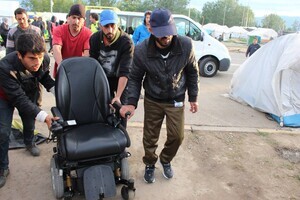 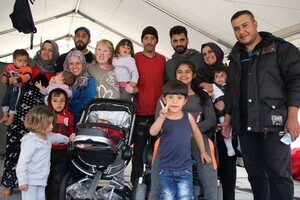 Carmel Nic Airt, from Clonakilty, West Cork, above left, is currently volunteering in Idomeni at the border of Greece and the Former Yugoslav Republic of Macedonia.

The Príomhoide of Gaelscoil Mhichíl Uí Choileáin volunteered on Leros island in March.

This week she returned to Greece – with two trucks of donated clothes and other items to share, including a wheelchair which she gave to Ghazal, a young woman from Syria.

“The wheelchair given to Ghazal was originally given to me by a relative of mine. Her brother who had Parkinson’s purchased the chair for himself in London where he lived. He got very little use out of it as he died suddenly not long after it was purchased.”

“I had a man called Yousuf in mind as his story was particularly tragic – he’s 37 years old, he lost both of his legs in a barrel bomb and he has no family. He was an electrical engineer with his own business in the past but he lost everything.”

“I felt he was the man for the chair and decided to try to locate him. However, I discovered that he had been taken to his brother in Germany by air due to a serious medical problem.”

“I then saw Palestinian journalist Mohammed Matter’s post on Facebook about Ghazal and how grateful she is to her dad for lifting and carrying her all the way from Syria and promising her that she will get to Germany where she will be treated.”

“I spoke to Mohammed about it and between us we realised we found the right person for the chair.”