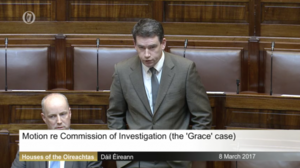 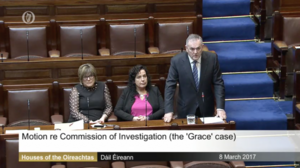 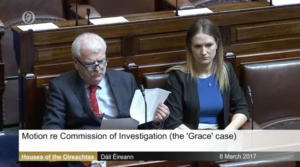 Waterford Fine Gael TD John Deasy called on members of the Dáil to be sceptical of what the HSE has said to date about the Grace case and set out examples of why he believes there was and is a cover-up in relation to the foster home.

Kilkenny Fianna Fáil TD John McGuinness said by accepting Mr McGrath’s terms of reference, and excluding other victims – 46 other people lived in the home – Dáil members were “heaping further abuse” on the families affected by the foster care home in the southeast of Ireland, saying: “We are now the abusers in this case.”

Mr McGuinness also recounted the harrowing experiences of other victims at the foster home.

Following their contributions, and that of other deputies, Mr McGrath announced that he is going to amend the current terms of reference – to make it explicit that the cases of the 46 other people would not be investigated in the second phase of the commission of investigation.

“What we discovered, myself and John McGuinness [Fianna Fail TD from Kilkenny] was that the first casualty was always the truth when dealing with the HSE and this issue. And I’d like to give you some examples of what is and was a cover-up.”

“The legal advice from the HSE from day one was to make Grace a ward of court to protect her. The HSE refused to do so. The reason? They had concerns about a judge asking awkward questions about HSE failings in this regard.”

“In June 2008, at the HSE Vulnerable Adults Committee, of the HSE, three options were discussed: one, do nothing; two, make her a ward of court; three, give the birth mother information under an FOI and risk her being made a ward of court as a result. It was noted at the meeting that, and I quote, ‘this would lead to a disastrous day in court as it would appear the HSE had done nothing’. The HSE took option one, did nothing, and denied the information the birth mother was entitled to under the FOI.”

“The agency caring for Grace were then refused any information, medical or otherwise, because the HSE didn’t want the agency to discover their failings. Conor Dignam found that to be a breach of duty, in the duty of care to Grace because she suffered trauma needlessly and started to self-harm as a result.”

“The agency then went about making her a ward of court themselves which would they legally mandate information to be imparted and would allow a solicitor to instruct for Grace. The HSE then told the agency not to do it. And said the agency could not take actions unapproved by the HSE. They were reminded, the agency, that the HSE was it’s sole funder.”

“The whistleblower told the HSE they were going ahead with wardship, the HSE contacted her manager and board of directors and pressurised them not to proceed. The HSE wrote to her line manager with fabricated information, alleging poor professional conduct.”

“Then, one HSE official innocently gave the whistleblower a psychological report on Grace when her HSE bosses found out, they accused her, the whistleblower, through a solicitor, of being aggressive and abusive and not a fit person to represent Grace.”

“When the HSE official who gave the report originally and innocently found this out, she actually signed a statement setting out it was a complete fabrication by the HSE. For five years, the Conal Devine report sat on a shelf, the HSE refused to give it to anyone.”

“On March 5, 2015, the PAC [public accounts committee] announced it had received a disclosure about non-publication of the Devine Report. The next day, the HSE first wrote to the gardai to seek the go-ahead to publish. When they came before the PAC, that’s some coincidence.”

“So was this a conspiracy, a cover-up? Yes its was. As I said before, this was a concerted and organised attempt to hide information and conceal the truth by a clique of HSE managers. This was an orchestrated attempt to protect officials and an organisation who fail people in State care in a catastrophic manner on a number of levels.”

“The terms in relation to the terms of reference is one that now cannot be amended, is my understanding. And yet it’s a motion that actually needs to be amended. And following our discussion with you last night, minister, and the whistleblowers, I believe that you should amend this motion.”

“It is simply not possible that we should, or it is not acceptable that we should carry this motion today in the context of the terms of reference when we know so much about this that is wrong. And what we are doing here, in this debate, and in accepting your terms of reference, we’re heaping further abuse on those families. We are now the abusers in this case. That is what is happening here. And let me explain why, minister, you know, you know this.”

“The whistleblower, first and foremost, exhausted every single avenue in the HSE, they tried everything to highlight the case and they weren’t listened to. They were forced to come to the public accounts committee to deal with a procurement issue about the reports that have cost this state almost €400,000 and it was out of that examination that came the story, not just of Grace, that’s a neat way of packaging it. It’s not just Grace, it’s Grace and 46 others that we need to look at. So we need to find out what happened within the HSE that covered up all of this scandal since 1982 – that’s what we need to do.”

“We need to go back before Grace and we need to maybe humanise this story. What about the young girl, at 12 years of age, that was taken out of that home? And this was before Grace. Taken out of that home because her mother was told by the school that she was attending school, bruised and beaten and neglected. And when that mother made complaints in 1992, to the health board, she was told to shut up. She was told not to repeat those stories. And she was threatened legally.”

“When she took her child out of that care. She then had to seek care in Northern Ireland. Because the South Eastern Health Board wouldn’t support her. How disgusting is that?”

“And she’s not going to be included in this report? And let’s put real words on it. She was battered, bruised, she was sexually abused, financially abused. And sexually abused anally so that today that woman has a life of pain and suffering and you’re not going to investigate her case? We should be ashamed of ourselves.”

“And then Grace. She turns up at the day care centre five-foot high, five kilos and they say, the doctor’s report says that she was ‘slim and well’. Now if that’s not an attempt to cover up what was happening in that home, then, I don’t know what is.”

“And I spoke to the carer this morning who cried bitter tears again, over the fact they were not being listened to. This was a major cover-up by the HSE. It was an astonishing set of events that has led to lives being destroyed and we are now here, discussing a set of terms of reference that are inadequate and that were not recommended by DIgnam.”

“He said, and you know this minister, stop covering up. You know this. His terms of reference are far more robust than what you have put in here and he refers to the fact that the other cases need to be investigated. I fully support the investigation in terms of Grace but the other ones, the other ones, they would not, minster, and you know this. You know this. And you’ve heard the public commentary last night. Where you were being told that we are further abusing these families and these individuals because we’re neglecting to take on board what the whisteblowers actually said, what Dignam actually said. And if we pass this, in this house, we should be ashamed of ourselves. I certainly won’t support it.” 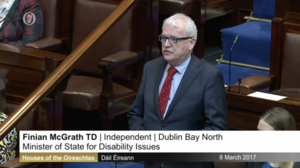 Minister of State with Responsibility for Disabilities Finian McGrath said:

“However, and I accept this one, I have listened to Brendan Howlin, David Cullinane, John McGuinness, and Margaret Murphy O’Mahony, I have listened, and to other deputies, to the concerns expressed here and for the avoidance of any doubt, I’ve decided to recommend to Government that we make this completely explicit in the terms of reference.

“I want to repeat: that my objective was to have a clear focus on the care of Grace, as a first phase of this work and I’m standing by this. There have already been a series of reports into the care of Grace but the facts of actually what happened and the reasons for certain key decisions are still not clear. And I accept your arguments on that. The commission provides to call witnesses and to hear the evidence so that we can finally learn the truth.”

“…I intend to circulate revised terms of reference to put at ease the minds of those who are concerned about the imperative for the cases of others to be investigated in a second phase.”