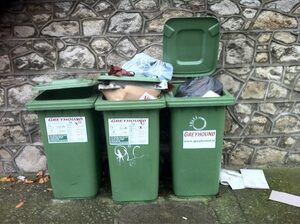 I heard on the radio this morning that the Chinese are no longer willing to recycle our recyclable waste and now we may have to pay additionally for that. I also heard that if there are any food remains in a single green bin then the entire lorry-load is discarded. If this is correct then the green bin is a waste of time.

I was born in south Dublin in 1966 and we had one bin about half the size of the current black bin and it was collected every week by the council.

At some point in time, all of these services were sent into oblivion because big companies could sell poorer quality produce cheaper. The people “running” these companies never did and never will understand anything other than “profits”.

The cost to the consumer today is that we will have to pay on the treble or the quadruple for succumbing to what appeared at the time to be a “sweet deal”.

I encourage consumers to seek out suppliers who produce and sell directly so that we might encourage a return to the ways of the 1960s and 1970s.