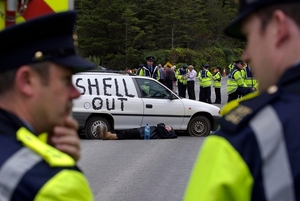 “GSOC has investigated approximately 124 complaints against members of the force arising from the policing of the Shell to sea protest. Of these complaints, GSOC deemed 37 to be inadmissible. That left 87 admissible cases of which 85 are closed. The following is a breakdown of 57 complaints directly linked to the Shell to Sea protest. There were 33 allegations of assault; 17 cases of abuse of authority; three of discreditable conduct; two of discourtesy; and two of neglect of duty.The remaining 30 complaints do not appear to relate directly to the protest, for example, a person driving home having participated in a protest at the Corrib gas site who was stopped by a garda and who subsequently made a complaint about the manner in which he or she was dealt with. There were no adverse findings in these cases. Some seven files out of the 124 were forwarded to the DPP for consideration, and the DPP directed no prosecution in all seven. These are all GSOC investigations. Disciplinary proceedings were recommended in 16 cases under section 95 of the Garda Síochána Act 2005.”

Read the debate in full here.