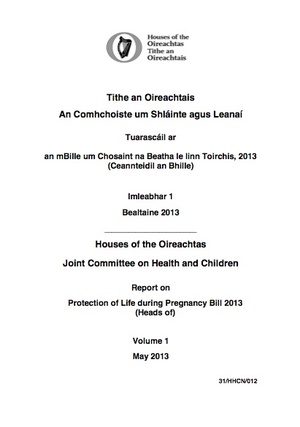 Available to read in full here.

The purpose of the Report is to provide an overview of the expert testimony and written submissions given to the Joint Committee, for the purposes of assisting the Government in drafting the proposed legislation.

In addition to considering each Head of the Bill, the Report considers expert evidence given generally on the legal requirement to legislate.

A number of experts including Professor William Binchy, Ms Caroline Simons and Dr Maria Cahill argued that there was no such requirement either under Irish constitutional law, the ABC judgment or the jurisprudence of the European Court of Human Rights.

A contrary view was taken by other experts, in particular Frank Callinan SC and Mrs Justice Catherine McGuinness, who felt that the State could not satisfy its obligations under the Constitution and the European Convention of Human Rights without the clarity of legislation.

In particular Mrs Justice McGuinness took the view that the Oireachtas had been negligent in failing to legislate to date.

As regards Head 2 of the Bill (Risk of loss of life from physical illness) the question of setting gestational limits was discussed.T

he majority of experts including Dr Peter Boylan rejected the view that this Head (or indeed Head 3, dealing with emergency termination) could permit late term abortions of viable babies.

All medical practitioners emphasised the importance of vindicating the rights of the unborn, often distinguishing between a situation where the unborn was viable outside the womb and where they were not; in the second situation, Dr Rhona Mahony stated, the question of conflict between the rights of the unborn and that of the mother did not arise since if the mother died the child would necessarily die too.

Suggestions were made that this Head be merged with Head 3 (emergency termination) and Head 4 (risk of loss of life from self-destruction).

As regards the question of definition of ‘real and substantial risk’ to the life of the mother, a key component of all heads, the view was expressed that it was best not to attempt to define this too precisely, being something that would have to be judged by the medical personnel involved in light of the circumstances of the case and best clinical practice, which is always evolving.

As regards the persons certifying Head 2, the suggestion was made by the Irish Council for Civil Liberties that only two doctors should be required to certify, of whom one should be an obstetrician.

The Irish College of General Practitioners and the National Women’s Council of Ireland expressed concerns regarding the requirement of consultation with the woman’s GP, from point of view of patient confidentiality, stating that such consultation was not essential and should not occur without the woman’s consent. As regards the emergency procedure under Head 3, the Medical Council felt that this should be limited to cases of ‘immediate real and substantial risk’.

In relation to Head 4 (risk of loss of life from self-destruction) some discussion took place as to whether or not abortion was never necessary in this context. The difficulties of predicting when a woman will die from suicide in pregnancy was discussed. It was emphasised that only in very rare cases would the termination of pregnancy be a realistic option for a suicidal woman.

Some experts took the view that abortion was never necessary as a treatment for the risk of suicide.Others, such as Dr Anthony McCarthy, took the view that there was a ‘small but real’ possibility of suicide in pregnancy, which steps must be taken to prevent. Some concern was expressed as to the lack of term limits in Head 4, which it was argued could lead to late-term abortions, with effects on the mental health of the women concerned.

The question of the persons necessary to certify under this head was also considered. In particular there was criticism of the requirement that one of the certifying psychiatrists be attached to the institution where the termination was to be carried out. It was pointed out that there were only three perinatal psychiatrists in the country.

It was proposed by some experts that GPs or consultant psychiatrists be able to certify without the need for a second doctor. The question of the role of an obstetrician re. certification under this Head also arose; the prevailing view was that the obstetrican’s role should be confined to the obstetrical aspects of the case and that he/she should have no veto

The question of time limits for the review of a decision not to certify under Heads 2 and 4, the entitlement to raise a conscientious objection and the criminalisation of abortion were also subject to consideration.

The Medical Council felt that the term ‘conscientious objection’ should be specifically included in the legislation. As regards the criminalisation of abortion, Dr Rhona Mahony and Dr Peter Boylan expressed the view that it would be wrong to threaten a woman involved in an abortion with conviction or imprisonment, particularly when she had been following legal advice.

Other experts expressed the view that it would be unfair and disproportionate to criminalise women’s decisions to end their pregnancies even outside the permitted situations in the Bill.

Meanwhile, the report includes this memorable exchange on page 528: 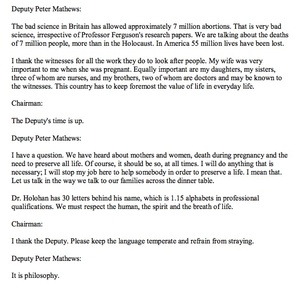