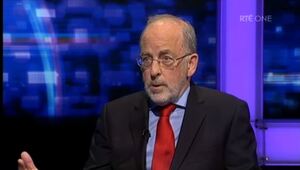 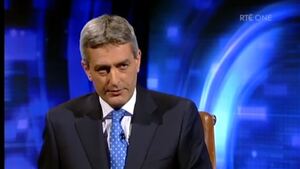 Governor of the Central Bank, Patrick Honohan appeared on Prime Time last night to talk to presenter David McCullagh about Ireland’s exit from the bailout without a credit line.

In a wide-ranging interview Mr Honohan also gave his thoughts on the chances of Irish taxpayers’ money from the bailout being recouped, growth in Europe and mortgage debt write-offs and house repossessions being a reality in Ireland.

He also explains why Irish taxpayers may not yet be finished pouring money into the banks.

David McCullagh: “Patrick Honohan, the Government is launching the ship of the state into potentially chopping waters without the benefit of a life-jacket. Did you agree with your colleagues in the ECB [European Central Bank] when they said it would have been prudent to take out the insurance policy?”

Patrick Honohan: “There are risks and there are ways of protecting against risks. I actually favour the clean exit, though a case can be made for the other approach. I don’t think it’s as important a decision as people maybe are inclined to make it out to be. We’ve come to the end of an important stage in the restabilisation of the Irish economy and, going ahead now, there are a lot of other things that help us move forward, apart from just a precautionary credit line for another year.”

McCullagh: “Well the Government is making quite a big deal about the fact that we’re going without the precautionary credit line, that we don’t need it, that we can launch, that we can make that clean exit. Were you consulted on that, in advance of the decision the Minister for Finance made? He mentioned a big long list of people he consulted?”

Honohan: “For sure. I volunteered my advice to him but I actually gave a sort of very balanced, between two options. In no way, was it like that last time if you like, three years ago, I wasn’t saying, this is definitely the way to go on one way or the other. I felt the Government could choose between the options here and I waited to see what they would say. They opted for a clean exit and actually I would have done the same for Ireland.”

Honohan: “You know you’re dealing, from now on, we’re dealing with markets, convincing markets that we, Ireland, are a creditworthy and a credible counterpart. This is a statement of intent, that the Government intends to continue on the path of discipline in its approach, and action to support economic recovery. Economic growth, fiscal discipline, those are the two things that keep our finances on an even keel and by going in this way, I think it helps convince the markets. That’s one of numerous arguments that can be made on both sides.”

McCullagh: “OK, but it’s interesting that you mention fiscal discipline because I was reading an article you wrote in the Irish Times I think, back in September, talking about John Maynard Keynes and austerity and all the rest of it, but you were making the point that what needed to be done was to stick the course, to keep to the programme and all the rest of it and that seemed to be advising the Government to stick with the €3.1billion adjustment in the Budget. The Fiscal Advisory Council gave exactly the same advice and the Government ignored it. So, now that the stabilisers are being taken off the bicycle, how can the bond markets be certain that the Government will actually do what it’s supposed to do, in their view?”

Honohan: “I think it’s within the margin of error. We heard the IMF saying, ah sure, the €2.5m will be enough – I paraphrase what they said. I would have gone for a little extra, basically in order to get the adjustment over with, faster because there’s still a certain amount of fiscal adjustment, in another year or so, of things to do, the sooner that’s over, the sooner the confidence, the domestic confidence can recover and the sooner we’ll get more spending and more growth.”

McCullagh: “Ok, now, the other leg of the Government’s strategy is, of course, to get the, try to get retrospective recapitalisation of the banks to try and pull back some of the billions that were poured into the Irish banks by the Irish taxpayer. Now, there seems to be certain amount of resistance, to put it mildly from the Germans, other people are saying this is never going to happen. Aren’t we in a bit of a difficult position now cause on the one hand, we’re saying everything is fine, we can go back to the markets, we can pay our own way and, on the other hand, we’re saying to Brussels and particularly to Berlin, ‘please sir can we have some more’?”

Honohan: “There’s no doubt that our debt levels are very high. The difficulty we have arrived at is partly due to the huge amounts of money that was poured into the banks. That I think now, however, is a political argument that has to take place among the governments of Europe. It’s not really to do with financial stability at this moment. It’s a political argument which, of course, the Central Bank will provide all the technical support and help that we can to win that argument over time.”

McCullagh: “And is it possible to win it?”

McCullagh: “And what are your colleagues on the ECB board saying to you, about all of this? I mean, presumably it’s a matter for discussion?”

Honohan: “Not really. Because the, arrangements between governments on who’s going to pay for what, they are matters for governments. Central bankers are dealing with monetary policy, stability, not distribution between different governments. So, actually, when I go to the ECB governing council we never have a discussion about ‘Is Ireland going to exit the programme? Is Ireland going to..’ That’s not the topic that. Of course the ECB staff are part of the Troika but not at the level of the Governing Council.”

McCullagh: “Ok, so we’re back in the markets, everything is fine, until everything isn’t fine and there’s some kind of external shock and there is clearly danger of that. What are you most worried about?”

Honohan: “Well, what am I…I’m always worried, I’m always scanning the horizon for risks, so I don’t think I would like to renumerate them in order to accelerate their arrival. There are a number of risks that one can see out on the horizon. And a number of things which we’re monitoring very closely. So, you take your choice now, I’m sure you have a list of your own that you would like me to comment on.”

McCullagh: “Well start with growth in the Eurozone?”

Honohan: “Growth in the Euozone, it’s not so much of a risk as a constant negative, the fact that growth is so much below potential in the Eurozone. And this is the matter of concern right across, I mean there’s no dispute about this. And there’s six quarters of recession have been followed by two quarters of very low growth so that is a weak environment in which to sustain and build the Irish recovery. We don’t depend entirely on the Eurozone for our trading partners, not at all, so we are getting growth from the USA, from China so Europe is not the only environment but, it’s a negative.”

McCullagh: “But for people at home, watching this, and you know worried about, obviously negative equity, they’re worried about unemployment, they’re worried about emigration and they’re wondering how long is it going to take before things are actually going to start getting better, for them. Not for the national accounts so much? For them. When are they going to see the growth as it lifts us all out of the mess?” END_OF_DOCUMENT_TOKEN_TO_BE_REPLACED 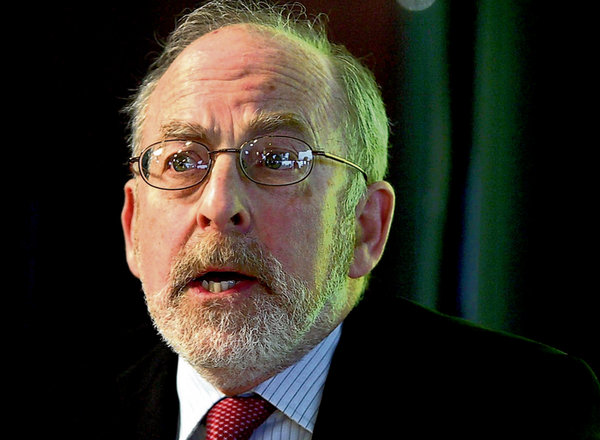 Ireland’s banks are effectively up for sale, Governor of the Central Bank Patrick Honohan said today.

“They are for sale as far as I am concerned,” Mr Honohan said in an address to Chartered Accountants Ireland in Dublin. “I’ve been an advocate for a number of years for small countries to have foreign owners for their banks.”

Wonderful. Just in time for Christmas. And with a full guarantee thrown in.