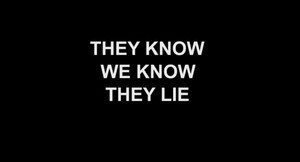 Poet, sound-artist and film-maker Robin Parmar sat down to watch Adam Curtis’ BBC documentary HyperNormalisation after all the hype.

Throughout the film he repeats absolutes like “all” and “every”, without support or justification. For example, in the Soviet Union in the 1980s “no-one believed in anything, or had any vision of the future” This is an essentially stupid statement that cannot possibly be true. It betrays Curtis as unwilling to allow his viewer the freedom to consider any reading of a situation, outside his own narrow view.

This attitude is in place from the outset of the film. “No-one has any vision of a different or a better kind of future” he states categorically. Er, “no-one”? Curtis is simply ignorant of the many thinkers from the 1970s until today, who proposed Green, anarchist, communitarian, or other alternatives to state power (a phrase I believe that Curtis never utters)….

It is telling that the film quotes not a single philosopher or political theorist, leaving us in an intellectual vacuum to be filled only by Curtis and his measured inflexible tones….

This is meant to reassure us. But such certitude and absolutist statements are suspect from the beginning, as they replace any deeper or broader understanding…

…I have belaboured this point since it’s symptomatic of Curtis’ approach. He creates a fictional totalising narrative in order to “make sense” of the apparent chaos of today’s society. He essentially uses the same techniques that the film pretends to critique. It’s theatre with himself as the protagonist, a documentary dictator if you will…

“…Patti Smith is singled out for derision, typified as “a new kind of individual radical”. Apparently Curtis is unaware of the antecedents, even though he might have studied the likes of Rimbaud when getting his humanities degree.

Curtis refuses the challenge of placing Smith within the context of rock music, photography (Mapplethorpe), the gallery scene, sexual expression, or, well, anything really. Instead he claims that people like her didn’t try to change anything but instead “turned to art and music as a means of expressing their criticism of society…

…This documentary is a cautionary tale, and Curtis offers no solutions. Those that lie directly under his nose are lost in his hyperopia. Instead, he repeats tired fears that were already played out in the last millennium.” 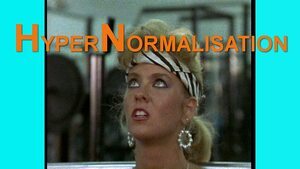 Some super-reality from documentarian Adam Curtis to kick off your Monday morning, commentating on the falseties of modernity.

An excerpt from last night’s feature-length feature, available on BBC iPlayer for those of us using proxies.

He argues that an army of technocrats, complacent radicals and Faustian internet entrepreneurs have conspired to create an unreal world; one whose familiar and often comforting details blind us to its total inauthenticity.

Not wishing to undersell the concept, Curtis begins the film with a shot of a torch shining limply into a thicket, so that viewers find themselves literally unable to see the wood for the trees.

There ye are now.