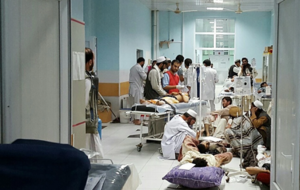 Médecins Sans Frontières staff treat those injured following the US bombing of a MSF hospital in Kunduz, Afghanistan on October 3

Following the US bombing of a hospital in Kunduz, Médecins Sans Frontières has called for the establishment of an independent fact-finding commission into this deadly attack (“MSF calls for commission on Kunduz hospital attack”, October 7th). According to the medical charity, the commission can be set up at the request of a single state under the Geneva Convention.

On behalf of the many Irish men and women who risk their lives on a daily basis working in conflict zones, shouldn’t the Irish Government now rise to the occasion and demand an inquest into the deaths of these innocent adults and children?