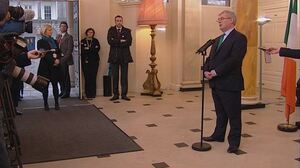 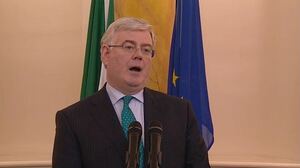 Tánaiste Eamon Gilmore spoke to journalists before he met with the EU’s other foreign affairs ministers in Dublin Castle for a ‘gymnich’ chat.

One of the reporters, unidentified, asked him about Cyprus, prompting the following:

Reporter: “The banks there (in Cyprus) are now urging the politicians to go back to the plan and impose the levy. And, it’s also been reported today that the rest of the EU is prepared to cut Cyprus loose in order not to have contagion. Is that the situation?”

Eamon Gilmore: “Well, I think Irish people have a lot of sympathy for the situation in Cyprus and certainly, I do. I think that the people in Cyprus are facing a really difficult set of circumstances right now. I can identify with that because, two years ago, when the government of, of which I’m a part of, my party is a part. When we took office two years ago, we were facing a situation where our banks were in serious trouble. The country was running out of money. And we had to make some very difficult decisions and make them very quickly. And I remember the first month that the new Government was in office here, we had to make a lot of decisions in a very quick period of time.”

“I think that the government in Cyprus and the parliament in Cyprus, they have decisions to make. I think, as I understand it, they’re going to be considering that over the next couple of days. I wish them well, in that. I believe that it is important that the rest of Europe stands in solidarity with Cyprus and the people of Cyprus. The whole approach that we have taken to the financial and banking crisis in Europe has been one of countries staying together, working together and helping each other out of the difficulties that we’re in. And I hope that we’ll be able to continue to do that with Cyprus.”