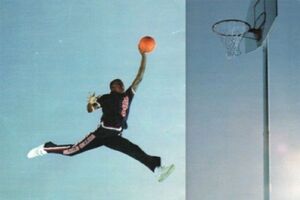 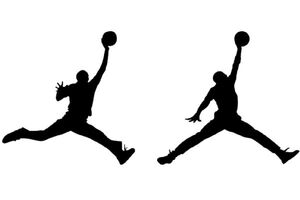 [Above: Jacobus Rentmeester’s photo of Michael Jordan and how the two silhouettes (Rentmeester’s left and Nike’s Jumpman right) compare.]

Jacobus Rentmeester is suing Nike in federal court in Oregon for copyright infringement. Not only is he asking for profits associated with the Jordan brand, which generated $3.2 billion in retail sales in 2014, but he also is seeking to halt current sales and plans for the brand’s future.
Rentmeester says he took a picture of Jordan in his Olympic warm-ups in 1984 for an issue of Life Magazine. After it was published, Nike’s Peter Moore, who designed the first Air Jordans, paid $150 for temporary use of Rentmeester’s slides. Rentmeester says Nike used his photo to recreate the shot with Jordan in Bulls gear with the Chicago skyline in the background, but that it was essentially still his work.