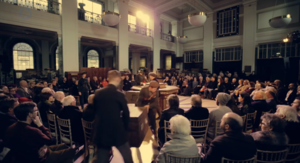 The acclaimed play about the Easter Rising by Colin Murphy. running in the main hall of the GPO on Dublin’s O’Connell Street.

MUST finish THIS Saturday [details below].

Inside The GPO (Fishamble) 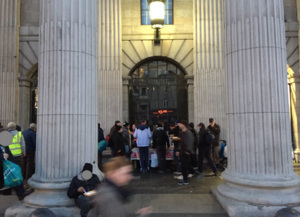 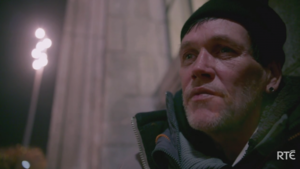 Tonight on RTÉ One at 7pm.

Mick Keane, pictured above, has slept under the portico of the GPO every night for a year, since returning from the UK. He refuses to move, preferring to sleep close to the Proclamation and he believes that the signatories of that document would turn in their graves if they could see the Ireland of today. 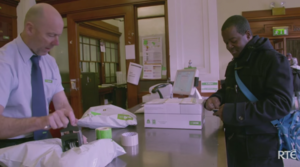 Regina Philip, originally from Tanzania, was granted asylum in Ireland but her daughter only made it as far as Paris. She is now 14-years-old and has been living in a hostel in the care of the French authorities for the last eight years.

When viewers meet Regina, she is sending a parcel of clothing to her daughter. She tells them: “I miss her a lot. I wish we can be together always. Circumstance doesn’t allow”.

Regina came to Ireland by way of Kenya and South Africa. She was lucky enough to find asylum but her daughter, who was just six-years-old when she arrived in Paris, is unable to join her here.

“She came to France when she was young, now she is 14. She has been there eight years with no family, with nobody. It is hard and it is sad. I am working out if I can go there or she can come here,” Regina tells viewers.