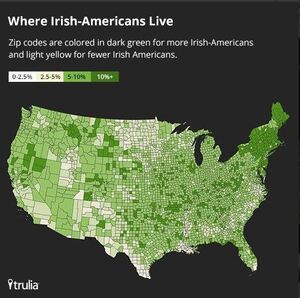 “According to the Census, there are 34.5 million Americans who list their heritage as either primarily or partially Irish. That number is, incidentally, seven times larger than the population of Ireland itself (4.68 million). Irish is the second-most common ancestry among Americans, falling just behind German.”

“There is exactly one neighborhood in the entire country that has a majority-Irish population, according to the data Kolko looked at: Breezy Point in Queens. There, 54.3 percent of the population claims Irish ancestry.”