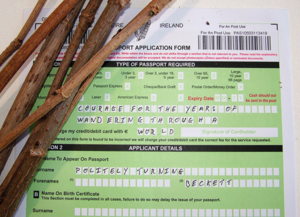 Are you an Irish emigrant?

Do you know any Irish emigrants?

I am a visual artist from Dublin, currently on residency with Draiocht Arts Centre in Blanchardstown. I am working towards several solo exhibitions in the second half of 2016 and, as part of this, I will have a piece that will comment on both Irish emigration and the refugee crisis in Europe.

To expand upon this conversation I wish to include actual boarding passes and plane tickets from Irish emigrants, these can be either from the original trip to leave Ireland or from a return journey. The main focus is that the ticket be from an Irish person who has emigrated.

These boarding passes will form the bed for a sculptural rendering of the Irish Navy ship LE Samuel Beckett, which has helped save over 8,500 refugees in the Mediterranean during three Irish Missions in the last year.

If you would like your boarding pass to be part of the sculptural piece, please send your digital copies to jasondeans1@gmail.com. If you would like to post printed copies you can do, addressed to Jason Deans, Draiocht, The Blanchardstown Centre, Dublin 15.

Any delicate information such as passport numbers will be removed.

‘Any Observer’ Solo exhibition will run from June 8 to September 10 at Draiocht, Blanchardstown; in Platform Arts, Belfast, in October and The Linenhalls in Mayo, in November.