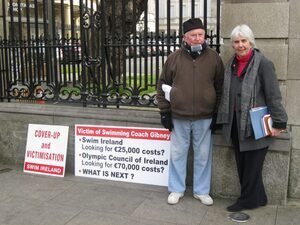 Bart Nolan, who spent decades campaigning for justice for people abused by Irish swimming coaches, has died at the age of 88.

In May 2003, in respect of US-based former Irish swimming coach George Gibney, Mr Nolan wrote to the then Minister for Justice Michael McDowell and asked him: “If you can extradite Conrad Gallagher for three paintings, why can’t you extradite George Gibney for seven rapes?”

This was prompted by the extradition of the chef to Ireland from the US to face allegations he stole three paintings from the Fitzwilliam Hotel at St Stephen’s Green in Dublin, where his Peacock Alley restaurant was located. Mr Gallagher was later acquitted.

In The Sunday Times…

“Bart has died. You would need to have known him to understand how unexpected that feels, even though he had been sick lately and heading towards his 89th birthday. Throughout his decades fighting for young swimmers who were sexually abused by their coaches, his admirers thought him unputdownable.

“At his funeral mass on Thursday in Dublin’s City Quay, around the corner from where he lived as a child, Fr Tom Clowe said Bart Nolan, deep-sea docker and familiar protester outside the gates of Leinster House, was “a man of great courage [who] grew up in a place where loneliness was not part of life because people had friends and neighbours and great values that built this country to be what it is today”.

“The absence at his funeral of those who held sway over the sport of swimming when Bart took it on was accentuated by the quiet weeping of former child swimmers and now elderly parents who had come to bury him with praise that could only ever be inadequate.

“Time and again the campaigner was threatened with being sued before being escorted away, with his homemade placard, from outside Swim Ireland’s annual meetings.

“Four of the sport’s once most powerful figures — George Gibney, Derry O’Rourke, Ger Doyle and Ronald Bennett, who included three national coaches — had preyed on their protégés. A fifth, Frank McCann, murdered his wife and his foster daughter to protect his secret: he had fathered the child of a vulnerable swimmer with special needs.

“Bart vowed to make Ireland’s pools safer for future generations. In his eulogy Bart Nolan Jr said his father was “the proverbial accidental hero”. I think not; it was his destiny to be heroic. He was born bolshie and afraid of nobody. As Bart’s coffin was shouldered from the gloomy church into an oblivious city, boisterous with lunch-hour throngs, one question remained: who will mind us now?“

Justine McCarthy: When a hero like Bart Nolan dies, state watchdogs such as Gsoc must step up (The Sunday Times)