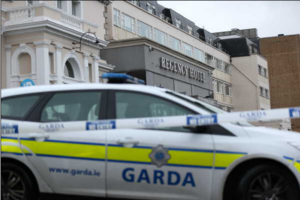 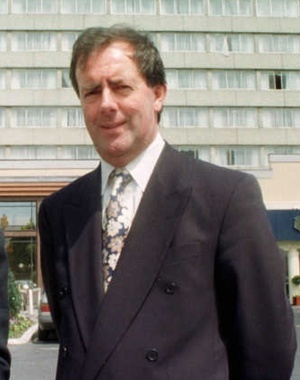 In a statement to the BBC this morning, a man alleging to speak on behalf of Continuity IRA said its members were responsible for the shooting in The Regency Hotel last Friday which left David Byrne dead and two men seriously injured.

The statement claimed Mr Byrne was shot because he had been involved in the killing of Alan Ryan in Dublin four years ago.

In a pre-recorded interview for RTÉ’s News At One, Áine Lawlor spoke with the managing director of The Regency Hotel, James McGettigan, who witnessed the shooting.

James McGettigan: “I was in the hotel bar with the general manager of the hotel, running through the business of the weekend. We had a very busy weekend, the hotel was full. We had a lot of Welsh rugby supporters over and we had Brendan Grace, who was playing for two nights so that was all booked out and the next thing is, there was commotion out in the reception area. There was sort of a panic. And within then maybe 15 seconds, three uniformed gardaí came in to the bar area and told everyone that this was the gardaí, to lie down on the floor and put your hands behind your heads.”

Áine Lawlor: “And you’d no reason to believe they weren’t gardaí at that stage?”

McGettigan: “Absolutely no. I mean these, they had the full Garda uniform. I mean they were very calm, very collected. I thought there was either an imminent robbery about to take place and the gardaí were about to thwart it or there was somebody in the bar that had done something somewhere else and the gardaí were about to, you know, arrest the person or something like that.”

Lawlor: “So they told people to lie down, they seemed very calm and collected. What happened then?”

McGettigan: “What happened then was there was a couple of shots fired. And then I saw a man just through a window in the bar basically getting assassinated. And that was just very, very shocking to watch. Because it happened so quickly and at this point, I really didn’t believe these guys were guards because the man beside me, who had a massive rifle – I don’t know what type it was – he basically, you know, he was basically looking at me and I was looking at him a little bit and, you know, I didn’t know if this was the real guards or not. But I started to believe that they weren’t and I started to panic. So then he disappeared and I went to the front door of the hotel to see if there was squad cars out there because I didn’t believe they were guards and this man is lying on the ground with blood pouring out of his head and I wanted to try and help him or save him or something. And when I went to the front door and opened it, I got a bit of a sinking feeling when I saw there was no cars out there at all, there was nothing.”

McGettigan: “Yes, that’s correct, yeah. And I ran down then, well ran, I walked down to the residents’ lounge of the hotel, I closed the door, I told this girl I met on the way who was an employee, I told her to immediately ring the guards and she said, the guards were already here. And I said, they’re not the guards. Went into the room and I slammed, closed the door and I locked it. There was a banging on the door afterwards, I don’t know who it was but I wasn’t going to open it to find out who it was and then I did try and contact the guards. Well when I rang 999, it was just a busy tone or it was a voice saying it was busy or something like that, I can’t remember exactly but I couldn’t get through. Now there may have been other people trying to ring at that point, I don’t know. But, look, you know, it was just very worrying not to get through you know? And, you know, I wanted to try and get these guys apprehended immediately. But I did eventually get through and…”

Lawlor: “How long did it take?”

Lawlor: “So you got through and that stage. And what was the response from the garda when you finally got through?”

McGettigan: “Well the person I spoke to on the phone, I explained what happened, and he then said, ‘I’ll put you through to the Dublin division’. Then I could just hear the phone ringing and ringing and ringing out for, I don’t know, maybe 20/25 seconds. And twice he came on and said, ‘look they’ll answer, they will answer eventually,’ or ‘they’re about to answer’ or something like that. So, like 25 seconds seemed like an eternity for me now. I don’t know why that was.”

Lawlor: “Was all of this, I mean, you know, these aren’t huge delays but equally there’s a you know, there’s murder on your premises, there’s gunmen roaming around the place dressed as gardaí, did you have any sense in that time that you were able to get the help you needed from the security forces as quickly as you needed?”

McGettigan: “I don’t know what was happening. I just, there was a man outside, in the lobby, on the ground, with blood coming out of his head and all I wanted to do was try to help that person, that was all I was trying to do and I thought that we could probably try and maybe get these guys arrested. But I did then ring a detective I know on his mobile and he, he answered straight away and said he would get somebody out and I think, within, I stayed in that room then, I don’t know, within about two, two and a half minutes, the police had arrived.”

Lawlor: “And as you say, it’s a couple of days later and it was an horrific experience for everyone who was there and so many people in the country, even if they’re not Dubliners, they all know the Regency Hotel, it’s such a landmark, it’s so ordinary and what happened was so extraordinary.”

McGettigan: “Absolutely yes, you know, and the real worry was, I mean I didn’t know, I mean, how many people could have been, you know, certainly shot at – least of all myself for being pretty stupid. But, you know, I thought the person who was shot, I didn’t know who he was but he was just a guest in our premises so we were trying to just, you know, take care of him.”

Lawlor: “As one human being to another.”

Previously: Getting The Shot