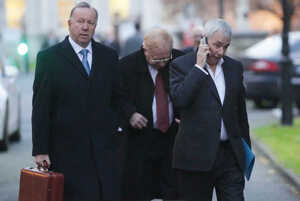 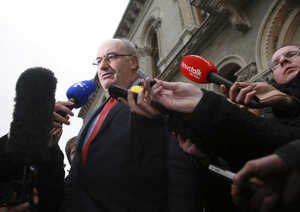 Our scandals. A recognisable timeline emerges.

1. Issue emerges. Country particularly mortified at how the British media cover it.

2. Public gasps at details. Sunday papers revel in particularly gory details. Fintan O’Toole writes a pithy piece which explains the cogent details very succinctly, and then drizzles it in extra-virgin head shaking like a nice salad.

3. Opposition call for unspecified action (“Something must be done! We need action!”) or specific action outside the power of the government. (“Bishops must resign! The effect on water of gravity must be reversed! Board members must be frozen in carbonite like Han Solo in The Empire Strikes Back!”)

4. Government shakes heads, and promises that said event (Clerical child abuse/flooding/banking corruption/Semi state squandering/asteroid crashing into the Earth) must never be permitted to happen again, and calls for commission to investigate report of commission which investigated incident. The Public Accounts Committee dances the traditional “Outraged! Outraged we are!” dance.

5. Media, political establishment, voters, realising that they actually play golf/went to school/are second cousin of individuals named in report, start calling for “due process” to be observed, and instead focus on details of events as if they were some abstract natural disaster.

6. The lawyers get involved. People’s right to “their good name”, passing of time, death of witnesses, gums up process of pursuit of actual criminals, drags investigations, trials, etc, in and out of high court for years.

7. Government takes money off people who did not commit these crimes (Taxes), and gives it to victims. The perpetrators contribution is eaten up in legal fees.

8. Some public officials take early retirement, on full pension. Which is pretty much the equivalent of a modest win in the National Lottery. Nobody goes to jail, except maybe a journalist who reveals how this thing is panning out, and is done for contempt of court.

9. In general election, Irish people vote for same people who allowed scandal to occur, on basis that although he/she failed to act to prevent sexual assault of children/building houses underwater, etc, he/she was always “very good for the area.” Irish people elect the crowd who used to do this sort of stuff before the current crowd got in by complaining that the last crowd who used to do this stuff did this stuff. They immediately start doing the stuff they complained the last crowd were always doing.

10. In 10 years, another commission reports on poor handling of this scandal. Reset to step 1.

An Occasional Guide to Irish Politics: The Scandal – Jason O’Mahony