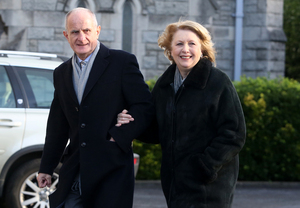 Patsy McGarry, in The Irish Times, reports that former President of Ireland Mary McAleese has threatened to leave the Catholic Church.

It follows an inquiry concluding that the founder of  L’Arche Community Jean Vanier, who died aged 90 in Paris last May, sexually abused at least six women between 1970 and 2005.

Mr McGarry reports that Ms McAleese is threatening to leave if it transpires that the Vatican failed to act to protect members of the L’Arche Community, which assists people with disabilities.

She said people should have been alerted to “the known predatory activities” of the community’s founder Jean Vanier and his mentor, Dominican priest Fr Thomas Philippe.

“I have to say that this will be my final line of least resistance. I could not in conscience continue to support an institution capable of such gross negligence,” Mrs McAleese said in the letter.

…She asked “what steps if any did the Holy See take to interrupt the growth of the powerful cult of Vanier by warning the many good men and women who trusted him in good faith that he had an alarming past?”

“I am one of those who regarded Vanier as inspirational for decades,” she said. “Hearing last week the awful story of his sexually and spiritually abusive conduct was devastating. Even worse was learning that the Holy See had been aware since the 1950s of his malevolent proclivities and those of his colleague Pere Thomas Phillippe.”