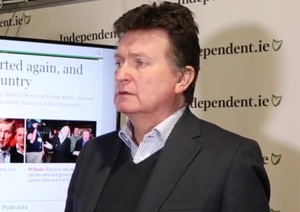 John Downing of The Irish Independent

Two minutes before the show ended.

During the Friday Gathering slot, Mr O’Rourke asked John Downing, of the Irish Independent, about the alleged hacking at Independent News and Media of its own staff and others.

Séan O’Rourke: “How concerning is this for you?”

Downing: “It’s been a bad week for Irish Independent, Independent newspapers generally. I’ve worked a chunk of a life there, in two different sessions. I’ve spent nearly 20 years working for them – a great place to be more usually.

Dismay and concern, the life and blood of journalism is the integrity of protecting and protecting sources – without it, nothing. It’s a subject of two major investigations, a high court hearing in ten days, it’s difficult to say too much more in any kind of detail.

The only positive I did take from it was that the paper has led the coverage of this sensitive issue to their own organisation. And, in doing that, maintained the separation between the commercial and the editorial.”

O’Rourke: “So no pulling of punches in the coverage?”

Downing: “Absolutely not. They’ve been ahead of the other news organisations.”

O’Rourke: “Well I suppose it has more information than any of the others.”

Downing: “Perhaps…but as you know, when issues affect, when RTÉ becomes the story, as it does from time to time also, it’s a tricky one to try and manage

O’Rourke: [laughs]. Anyway, look, those occasions, we’ll leave it there.”