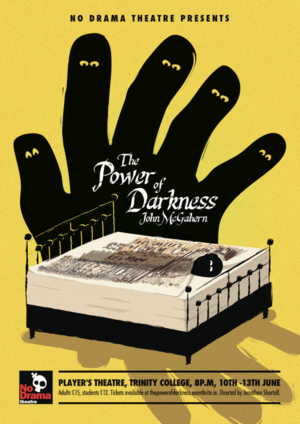 The Power of Darkness at The Player’s Theatre, Trinity College.

“The Power of Darkness” is written by John McGahern, t he only play he has ever wrote and it has not been staged since 1991 in the Abbey.”

Of the plot, he sez:

“Peter King, a prominent landowner, is dying. His considerable wealth was earned by his hardness and shrewdness in breeding and training horses, but he lives in much the same way as the poor farmers that surround him. He has a 20-year-old daughter, Maggie, from his first marriage, and his second wife, Eileen, is half his age. He expects them to work like servants, and he does not allow his money to spread ease or to give them comfort in his twilight.”

“His illness forces him to take on a young workman, Paul, the son of poor farmers who owe him money. Paul has a history of living at home, doing casual labour and womanizing. He is a potent mixture of good looks, sexual egotism, weakness and vanity. His ruthless mother, Baby, is perfectly in tune with her circumstances. Her decent husband, Oliver, Paul’s father, is deeply religious but appears as slow-witted and ineffective as she is oily and worldly-wise. An old soldier, Paddy, who is fighting a losing battle with the drink, is lured into the drama and gradually he becomes its moral voice.”

Tickets from No Drama Theatre